LONDON • Twelve months after an unprecedented postponement because of the Covid-19 pandemic, Euro 2020 is set to start today, although the continent is still struggling with the coronavirus.

Despite calls to stage the tournament in one country, organisers decided to stick with their maiden plan to hold games across Europe, although the number of cities has been cut from 12 to 11 after Dublin's withdrawal.

While teams will be in a semi-bubble, the tournament itself will not be held behind closed doors and there are fears there may be a spike in infections as fans descend on Amsterdam, Baku, Bucharest, Budapest, Copenhagen, Glasgow, London, Munich, Rome, St Petersburg and Seville.

Russian epidemiologists are worried that the seven games to be played in St Petersburg, which is the country's second-biggest hot spot after Moscow, will exacerbate the problem.

"The city lives as if the pandemic is over," Dr Anton Barchuk, who works at the European University at St Petersburg, said earlier this week.

However, the head of the organising committee for Euro 2020 in St Petersburg, Alexey Sorokin, has insisted authorities "were not afraid" and "we are sure we can provide for all safety measures".

The concerns also apply to the 24 national teams after Spain and Sweden were both hit by Covid-19 cases in their training camps this week.

Diego Llorente on Tuesday became the second La Roja player to return a positive test after captain Sergio Busquets, while the Swedes announced Dejan Kulusevski and Mattias Svanberg were infected, with the former set to miss his country's opener against Spain.

Scotland's John Fleck is also in isolation after testing positive.

Vaccinations, while encouraged, have not been made compulsory at the Euro, but Spain on Wednesday decided to inoculate their team because of the outbreak.

To ward off any more disruptions to their preparations, others will administer daily antigen tests and increase the number of polymerase chain reaction tests.

Indoor meetings will be held in smaller groups with safe distancing in place, while time limits will also be set on players receiving physiotherapy, with sessions to be held outdoors if possible.

All press conferences will be performed via video link to reduce transmission risks with no mixed zones for players to talk to media.

In order to reduce any potential impact of an outbreak, Uefa has increased squad sizes from 23 players to 26.

To ensure flexibility, if any team are partially placed in quarantine or isolation, the match can go ahead as long as there are at least 13 players including a goalkeeper.

Uefa can also reschedule a match within 48 hours, or relocate it, but if none of those options are possible, the team responsible for the cancellation of the match will be handed a 3-0 defeat.

As for the stadiums, there will be a pandemic-restricted crowd at all venues, with Munich setting the cap as low as 22 per cent or 14,500 fans at the Allianz Arena.

Budapest's Puskas Arena is the only ground that will welcome a full house with around 61,000 fans expected. Numbers may increase as the competition progresses, while different cities have their own rules for fan entry.

Supporters attending England's Euro 2020 group games at Wembley must show proof of vaccination - both shots have to be administered at least 14 days prior - or a negative test before being allowed in.

However, there will be staggered times so as to ensure safe distancing, temperature checks and rapid antigen tests are implemented at all points of entry.

As for flying to the cities themselves, there are different regulations - Baku, Bucharest and Budapest only need fans to show a negative Covid-19 test before boarding their flights.

Russia, Germany and Britain are more strict, with St Petersburg and Munich authorities imposing compulsory quarantine for British fans in a hotel for 14 and 10 days respectively due to the Delta variant, which was first identified in India.

All visitors from Euro 2020 countries that are on the UK's "amber list" will have to soft quarantine for 10 days on arrival. 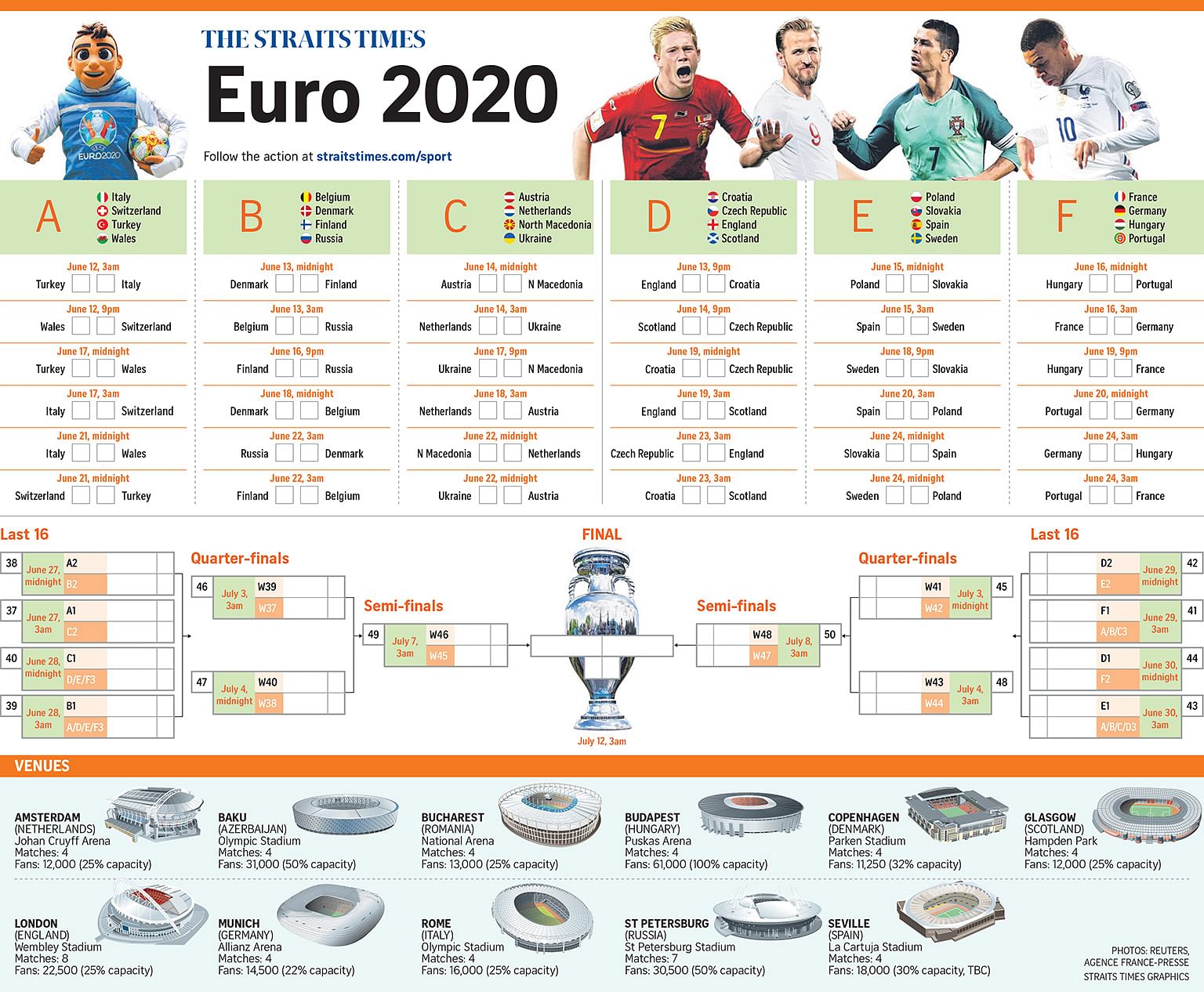 A version of this article appeared in the print edition of The Straits Times on June 11, 2021, with the headline 'How Euro copes with Covid'. Subscribe
Topics:
More
Whatsapp Linkedin FB Messenger Telegram Reddit WeChat Pinterest Print Purchase Article Copy permalink