The German Bundesliga has lost some of its leading lights to the English Premier League in recent years.

Midfielders Ilkay Gundogan and Henrikh Mkhitaryan and wonderkid Leroy Sane are among those who crossed the English channel this transfer window.

But former German international Jens Lehmann, 46, believes this exodus does not dull the competitiveness or lustre of the Bundesliga.

EPL clubs have spent about £165 million (S$294 million) on eight players from Germany this off-season, with a further three joining on a free transfer. But some targets have opted to stay in Germany, including coveted striker Robert Lewandowski, winger Julian Draxler and defender Mats Hummels.

IT'S ALL ABOUT FOOTBALL

As a player, your first thought every morning should be, 'Today I have to improve myself.' But only 5 to 10 per cent of players actually think that. That's why only a few clubs can win something.

Lehmann added: "Gundogan and Sane (are big talents). The rest are good, but not spectacular."

The goalkeeper, who also played for German clubs Schalke, Borussia Dortmund and Stuttgart, added: "Of course (the exodus) is not perfect but it gives clubs money and opportunity to buy new talent or to invest money otherwise." 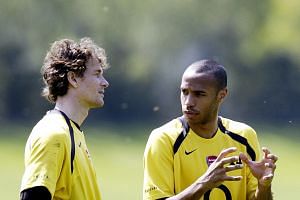 No messing about during Arsenal training: Lehmann

If the performances of German sides in European competitions are anything to go by, Lehmann, who has one EPL title and one FA Cup to his name, is not far off the mark.

Since 2009, eight German clubs have reached the semi-finals of the Champions League, compared with four from England. European football's ruling body Uefa has also ranked the Bundesliga second for club competitions, one above the EPL.

The two-time Uefa Club Goalkeeper of the Year said: "When I was playing (in England), I could honestly say it was the fastest league by far. The tempo is so high.

"So it's all about education and (spreading the) knowledge (that the Bundesliga is superior)."

A big part of the success, Lehmann said, is down to the sound youth football infrastructure put in place by the German Football Association in the aftermath of a disastrous Euro 2000 campaign.

In town as part of the Bundesliga Legends Tour, where former players travel the world to promote the German league, Lehmann also surprised with his disarming demeanour.

Looking sharp in a blue shirt, matching jeans and speaking with a soft but sure voice, it was difficult to envision him as the controversial and outspoken goalkeeper who still holds the record for receiving the most red cards - five - in the Bundesliga, and who was nicknamed "Mad Jens" by the Gunners faithful.

He also spoke keenly about the finances of German clubs, emphasising how they need to seek more investment from big sponsors to catch up with their English rivals, and even explained how he used dollar-cost averaging to minimise losses on Borussia Dortmund shares he bought earlier.

A holder of the Uefa Pro Licence, the highest coaching qualification in Europe, Lehmann said he is not actively looking for a job but is open to taking up coaching positions.

If he does score the coaching role he desires, players can expect a no-nonsense approach from Lehmann, who lamented how some players at his former clubs "never thought about winning something".

He said: "Some of them see American rappers as role models, or think they want to be entrepreneurs, or go into the music business. It's stupid, because the only thing they can do is play football.

"Arsenal have some examples and the other clubs as well.

"As a player, your first thought every morning should be, 'Today I have to improve myself'. But only 5 to 10 per cent of players actually think that. That's why only a few clubs can win something."