Footballer Ben Davis has defaulted on his national service commitments, the Ministry of Defence (Mindef) said in a statement yesterday.

In response to queries from The Straits Times, Mindef said: "Mr Benjamin Davis is an NS defaulter. He failed to report for NS as required. He is also staying overseas without a valid exit permit.

"Mr Davis has committed offences under the Enlistment Act, and is liable upon conviction to a fine of up to $10,000 and/or imprisonment of up to three years."

ST understands that Davis was required to enlist last Thursday.

His father Harvey Davis did not reply when asked to respond to the Mindef statement.

However, the Football Association of Singapore (FAS) expressed its dismay at the news and issued a strongly worded admonition of the player, whom it capped at the Under-19 level. Davis was also called up to the senior national team last year but was not fielded.

A spokesman said: "The FAS is extremely disappointed with Mr Benjamin Davis' default of his NS obligations. It is thoroughly irresponsible on the part of Mr Davis, and also reneges on his (and his father's) assurance to the FAS that Mr Davis would discharge his NS commitments and play for the Singapore national team."

The spokesman added that the association had supported Davis' application to defer his NS, on the basis that he had agreed to play for the national team, and had benefited from the resources used to educate and train him. "While the matter will now be dealt with by Mindef, the FAS wishes to state categorically that we do not condone such conduct nor did it ever arise in our discussions with Mr Davis that he would seek to avoid his liability," said the spokesman.

A former student at the Singapore Sports School, Davis, 18, moved to London in 2016 to join English Premier League (EPL) club Fulham's academy, where he is registered as an English national.

He was born in Thailand to an English father and a Thai mother.

The Phuket-born player signed professional terms with Fulham last July, becoming the first Singaporean footballer to do so with a top-tier English club.

After he signed, Mindef confirmed that his application for NS deferment had been rejected as he did not "meet the criteria for long-term deferment from full-time NS". 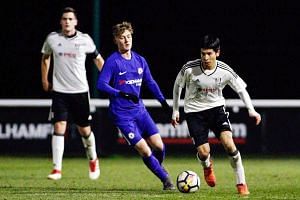 No more appeals made in Ben Davis case: Mindef

Ben Davis is playing for Fulham as an English national, not as a Singapore citizen: Ng Eng Hen

The decision sparked a debate among the sporting fraternity and the general public about issues such as maximising sporting talent and the need to maintain Singapore's security.

In August last year, Defence Minister Ng Eng Hen laid out the reasons for the rejection in Parliament, highlighting that "there was no commitment to serve Singapore and our national interests" despite Mr Harvey Davis' contention that if his son were to become the first Singaporean to play in the EPL, it would "make Singapore proud".

Dr Ng reiterated that "deferment... cannot be for that individual, no matter how talented, to pursue his own interests or career, even if it vicariously brings credit or fame to Singapore".

He also noted that Mr Harvey Davis had "consistently refused" to pin down a date for his son to return to serve NS. Mindef has also noted that there are programmes in place to help national athletes continue training while serving NS.

In the last 15 years, only three athletes - swimmers Joseph Schooling and Quah Zheng Wen, and sailor Maximillian Soh - have been granted long-term deferment.

Schooling and Quah have represented the Republic at various Olympics, with the former making history by winning gold in the 100m butterfly at the 2016 Rio Games.

Davis enjoyed a strong start in his first season with the Fulham Under-18 team - he scored once in 10 games, making 13 tackles and 16 interceptions while racking up a pass accuracy of 90 per cent - but ST understands he has found the going tougher in his sophomore season.

A source, who did not want to be named, said that Davis' performance was adversely affected after news emerged that his application for NS deferment had been rejected.

While he started 12 of Fulham Under-18s' first 14 matches of the season, he has played only 136 out of a possible 630 minutes in their last seven games. He also earned the call-up to the Under-21 team for four games, but was an unused substitute on each of those occasions.

Fulham did not reply to ST's queries by press time.

NS defaulters who are under the age of 40 are still required to serve if they return.

A defaulter's sentence may be discounted based on various factors, such as the length of period of default, how substantial his connection to Singapore is, whether he voluntarily surrendered or was arrested, and whether he pleaded guilty or claimed trial.

Correction note: This article has been updated to reflect the four-band sentencing based on the length of the period of NS default.