MADRID (AFP) - Real Madrid manager Zinedine Zidane opened the door to a possible bid for Paul Pogba on Saturday (March 30) when he hailed the Manchester United star as "a player who knows how to do everything".

The French World Cup winner has thrived under new United boss Ole Gunnar Solskjaer but has made no secret of his admiration for Real.

"It's one of the biggest clubs in the world. I've always said Real Madrid is a dream club for every player," the midfielder said last week.

Zidane is a self-confessed Pogba fan, the Real boss telling a press conference: "I really like the player, that's nothing new.

"I know him personally... He's a really different player, somebody who brings something few others can to the pitch.

"He's capable of doing everything. There are midfielders who know how to defend really well, others who are very good in attack. He knows how to do everything."

Zidane, who returned as Real manager after replacing Santiago Solari, added: "One day, if he has the chance to do something else after Manchester United, he's always said that Madrid was a club that interested him a lot." 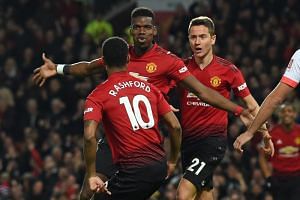 Spanish media suggest Real will go on a massive recruitment drive this summer with a war chest of up to €500 million (S$760 million).