For all their flashy moves off the pitch and subsequent cash-flow issues, it is on the pitch where it truly matters and on that note, Tampines Rovers delivered as they qualified for the Asian Football Confederation (AFC) Cup round of 16 yesterday.

A stunning goal by midfield dynamo Yasir Hanapi, artfully curled into the top left-hand corner, was enough to see off Selangor and delight the 11,875 crowd at the National Stadium. 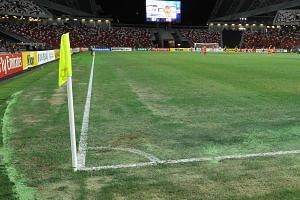 Before the game, the Group E equation was simple. With seven points after five group games, the Stags had trailed Selangor by one and leaders Ceres of the Philippines by two entering yesterday's tie and needed nothing less than a win to finish in the top two and qualify.

Coach V. Sundramoorthy hoped the win, which saw Tampines make the knockout stage for the first time since 2011, would ease some of the bad press surrounding his team.

He said: "After (five years) we make the last 16. This is some positive news for Singapore football. This victory is indication (that) our league is becoming more competitive. I believe we are going in the right direction."

On his stunning winner, Yasir, who could not stop smiling at the post-match press conference, said: "No words can describe how I feel right now. I'm just very happy."

Stacked with eight members of the disbanded LionsXII side and boosted by ex-Arsenal and Liverpool winger Jermaine Pennant, the Stags will face Indian team Mohun Bagan over one leg on May 24 in Kolkata, the same side that knocked them out of the AFC Champions League play-off stage with a 3-1 win.

But Sundram believes the result will be different this time.

He said: "The objective is to go there and try to win the game. We've played Mohun Bagan, we know their strengths. We will try to counter that."

This was Tampines' second victory over Selangor in the AFC Cup. In the reverse fixture, they had also won 1-0 in Selayang.

But, while his counterpart Zainal Abidin said on Monday that the Malaysian Super League (MSL) is superior to the S-League, Sundram refused to be drawn into the debate.

He only said: "I think the MSL is as good as the S-League. Against any Malaysian team it is quite even. It all depends on who's better on the day."

In a brief 90-second appearance at the post-match conference, Zainal lamented: "Once you miss chances, that's it. Well done to Tampines, bad luck for Selangor."

Victory aside, Tampines players and coaches were also heartened by the turnout.

While the S-League riled some by giving out free tickets to fans of other S-League clubs, Pennant said the players still thrived playing in front of a big crowd.

He said: "It's the best atmosphere I've played in as a Tampines player. Full credit to the fans for showing up. The players enjoyed it and it helps.

"That's what professional football is about, the big crowds. It gave us an edge, especially in the last 10 minutes when we had to fight."

In the other Group E match, Ceres beat Bangladeshi side Sheikh Jamal Dhanmondi 5-0.

While it was high-fives and hugs at Kallang, it was disappointment for Singapore side Balestier Khalsa, who wrapped up their AFC Cup campaign with a 4-0 away defeat by Hong Kong's Kitchee. The Tigers finished third in their group.

A version of this article appeared in the print edition of The Straits Times on May 11, 2016, with the headline 'Yasir puts Stags into round of 16'. Subscribe
Topics:
More
Whatsapp Linkedin FB Messenger Telegram Reddit WeChat Pinterest Print Purchase Article Copy permalink