Pentagon Awards honour contributions on and off pitch, set to become annual affair

A glitzy black-tie event at the swanky Fullerton Bay Hotel, complete with a high-profile guest list sprinkled with a dash of royalty.

Hardly an occasion one would associate with local - or regional - football, but that was what the Pentagon Awards, conceived by Tampines Rovers chairman Krishna Ramachandra, delivered last night.

The awards, supported by the Asian Football Confederation (AFC), aim to recognise men and women in South-east Asia who have contributed to the sport both on and off the pitch on top of sporting excellence. 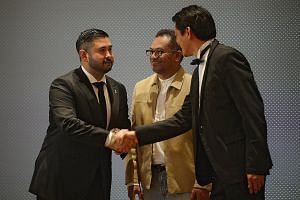 The awards' uniqueness was evident in the night's five main winners, which included two former players, a club chairman, a referee and a budding footballer.

In his acceptance speech, he said: "Once you do everything right, put the right energy and passion in it, everything is possible. This is only the beginning for JDT."

While organising the event took up a lot of his time, Krishna, a corporate lawyer by profession, restated his desire to make this an annual affair.

"Human beings by nature need to be acknowledged and endorsed for the great work they do," he said.

"The subsequent years will certainly run efficiently and we can learn from some of the things we missed out this time around."

With four of the five winners hailing from Singapore, Krishna said he is working towards greater representation from South-east Asian countries for next year's edition. He said: "We now have a head start for the 2017 awards so hopefully winners can come from further afield."

The ceremony doubled as a fund-raiser for Tampines. A charity auction was held and more than $100,000 was raised for Beyond Social Services, an organisation that works with disadvantaged youths.