Here are some key facts about Zidane:

- Began his playing career with AS Cannes and made his professional debut in May 1989.

- Moved to Girondins Bordeaux in 1992 and scored 28 goals in 139 league appearances during four seasons.

- Moved to Juventus in 1996. Helped the club win two Italian Serie A titles in his first two seasons. Won the European Super Cup and the World Club Cup with Juventus.

- Played in the Champions League final in 1997 and 1998 but Juventus were beaten both times, by Borussia Dortmund and Real Madrid respectively.

- Made France debut in 2-2 draw against the Czech Republic in August 1994. Scored two goals in 17 minutes after coming on as a second-half substitute.

- During the 1998 World Cup, was sent off after 70 minutes of France's 4-0 first-round victory over Saudi Arabia and missed the next two matches. Headed in two first-half goals to help France win their first World Cup with a 3-0 victory over Brazil.

- Named player of the tournament as he helped France to victory in Euro 2000.

- Retired from international soccer in August 2004 but a year later announced his comeback. Having already said he would retire after the 2006 World Cup, he helped France reach the final against Italy.

- Zidane was sent off during extra time in the final for butting Italy defender Marco Materazzi in the chest. Italy went on to win the title in the penalty shootout.

- In 2013, Zidane was appointed assistant coach to Carlo Ancelotti at Real Madrid. 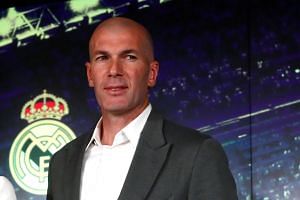 - Became the first manager to win three European Cup titles in a row.

- Zidane also guided the club to a Liga title in the 2016-17 season and two Fifa Club World Cup crowns.

- On May 31, 2018, he stepped down after leading the club to three consecutive Champions League titles.

- He was reappointed Real Madrid coach on March 11, 2019 nine months after resigning.