LEICESTER, United Kingdom (AFP) - Leicester City captain Wes Morgan hoisted the Premier League trophy aloft to a burst of pyrotechnics on Saturday as one of sport's most captivating stories reached its giddy climax.

Following a 3-1 win over Everton in their final home game, the 5,000-1 outsiders, whose exploits have captivated fans around the world, got their hands on the prized trophy at an exultant King Power Stadium.

After the players had been called up one by one to a hastily constructed on-pitch plinth - the biggest cheers reserved for star players Jamie Vardy, Riyad Mahrez and N'Golo Kante - Morgan was handed the trophy by competition winner Steve Worthy, a lifelong Leicester fan.

The club's inspirational manager Claudio Ranieri was at Morgan's side as the Jamaica international centre-back raised the trophy above his head, to a backdrop of fireworks and spiralling blue and gold streamers.

The 25kg trophy was decorated with ribbons of blue, for Leicester, and yellow, representing the royal house of Thailand, home country of club owner Vichai Srivaddhanaprabha, who looked on admiringly.

As the players embarked on a lap of honour, Leicester's fans, who saw their team narrowly avoid relegation last season, burst into a chorus of "Leicester till I die!".

It was followed by "Barcelona, we're coming for you!", in a nod to next season's hotly anticipated Champions League campaign.

Vardy scored a brace and missed a penalty in the victory over Everton, which took Ranieri's men 10 points clear of second-place Tottenham Hotspur ahead of the London club's game with Southampton on Sunday. 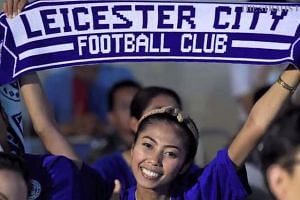 Leicester not just about its champion football club? Here are the city's 10 Asian connections 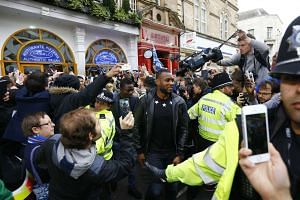 Banned for Leicester's two previous games, Vardy struck in each half, with Andy King also on target, and would have had a hat-trick had he not blazed a second-half penalty over the bar.

Prior to kick-off, fans were treated to a performance by renowned Italian tenor Andrea Bocelli, who prompted roars of approval from the flag-waving home support by removing his jacket to reveal a blue Leicester shirt as he sang.

Leicester play their final game of the season next Sunday at outgoing champions Chelsea, Ranieri's former club, before an open-top bus parade in Leicester on May 16.

Tottenham's 2-2 draw at Chelsea last Monday, which gave Leicester the title, sparked a week of celebrations in the city and fans arrived at the stadium several hours before kick-off on Saturday to drink in the moment.

Supporters formed a snake-like queue for blue team jerseys stamped with a gold and white "Premier League Champions 2015-16" sleeve badge, while souvenir scarves, flags and programmes were eagerly snapped up from stalls around the ground.

Should have been us. #Leicester

Bright sunshine gave way to heavy spring downpours as kick-off approached, but the atmosphere inside the stadium remained fervent.

The sell-out 32,140 crowd witnessed a stirring pre-match performance by Bocelli, who fulfilled a recent promise to his compatriot Ranieri by singing 'Nessun Dorma' and 'Time to Say Goodbye'.

Everton's players gave their opponents a guard of honour as they emerged onto the pitch and it took Leicester less than five minutes to go ahead as Vardy converted King's lofted cross for his 23rd goal of the campaign.

King made it 2-0 in the 33rd minute, sweeping home right-footed after Riyad Mahrez's jinking run into the box was halted by Leighton Baines.

Vardy added a third 20 minutes after the interval, drilling a penalty past Joel Robles after he had been fouled by Matthew Pennington.

It would have been a hat-trick, but after Jeff Schlupp had been poleaxed by fellow substitute Darron Gibson, Vardy blazed his second penalty into the stand, prompting a shake of the head and a rueful smile.

Kevin Mirallas replied late on for Roberto Martinez's Everton, who slipped one place to 12th in the table.

Vardy now has 24 goals for the campaign, one behind Tottenham's Harry Kane in the race for the Golden Boot.