LONDON • Arsene Wenger says that he and his Arsenal players must work to get the club's disgruntled fans back onside, as he made the point that a "negative environment" at the Emirates Stadium could only be counter-productive.

Arsenal have seen their Premier League title hopes all but die after a run of four wins in 13 matches and they face West Bromwich Albion at home today with a proportion of their season-ticket holders having indicated that they will not turn up.

Due to that, the club have taken the unusual step of putting tickets on general sale. There were more than 2,500 seats available on Tuesday to the club's members on the ticket exchange while a few hundred more were on offer to the general public.

The sense of frustration and disillusionment is clear, and it has been easy to feel the tension at many recent games at the Emirates. The team were booed off after Sunday's 1-1 draw with Crystal Palace. Wenger, though, is nothing if not stoic, and phlegmatic. 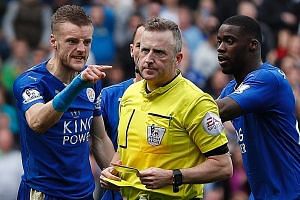 "Everybody is free to do what he wants with his season ticket," Wenger said.

I want our fans to be happy. When they are not, it affects me. I hope Arsenal will always play in the top three and people won't get disenchanted.

"Is the disillusionment more pronounced? Yeah, maybe. But we have to take that with distance as well, and focus on our job. The emotional part in our game is always very high but it changes very quickly, as well.

"Judgment from people is something we have to live with. It's down to us to change that belief and judgment."

Wenger called for the fans who do attend against West Brom to stay behind the team.

"I want our fans to be happy and when they are not, it affects me," he said. "You do not want to play in a negative environment; if we do, we can still perform.

"We are responsible for the performance of the team and it is true that, at the moment, it is not a highlight but we have to take a distance with that.

"I hope in the next years, Arsenal will always play in the top three and, hopefully, people won't get disenchanted."

Not for the first time, Wenger gave short shrift to the question of whether he would consider his future in the summer - 12 months before the end of his contract.

"I do not want to come back on that," he said. "I respect always my contract. Every time it doesn't work, you question yourself. That is part of your job. Of course, in the end, it's always down to me, so I have to stand up for that. You make your decisions and you stand up for them."

Wenger said that Jack Wilshere had come through his 90-minute appearance for the club's Under-21s against West Brom on Monday but he would not feature today. But he could be in contention for Sunday's visit to Sunderland.

Wenger also expressed his confidence that Mesut Oezil and Alexis Sanchez would agree to new contracts. Their deals expire in the summer of 2018.

"These two players have two years on their contracts at the end of the season," Wenger said.

"We are not in a hurry. We are talking and the players are very keen to stay."