DOHA (AFP) - Former Arsenal manager Arsene Wenger has defended Mesut Ozil after comments made by the Gunners midfielder condemning treatment of Uighur Muslims led to a stinging backlash in China.

"Mesut Ozil has the freedom of speech like everybody else and he uses his notoriety to express his opinions which are not necessarily shared by everybody, but he has the right to do that," the 70-year-old told journalists in Doha on Wednesday (Dec 18).

However, the Frenchman added: "When you make a comment about your individual opinion, you accept the consequences of it."

Ozil, a German of Turkish origin, condemned China's crackdown on Muslim minorities in the western region of Xinjiang in a tweet last week.

Arsenal have distanced themselves from Ozil's comments, but the Chinese state media warned that they would have "serious implications" for his club. On Tuesday, US Secretary of State Mike Pompeo denounced China's reaction over the matter.

"What is important is that Ozil has an individual responsibility. He does not carry the word of Arsenal Football Club, so what he says is about himself and not about Arsenal," added Wenger, who oversaw Ozil's arrival at the Emirates Stadium from Real Madrid in 2013.

Wenger is in Qatar - where this week's Club World Cup is taking place - in his new role as Fifa's chief of global football development. 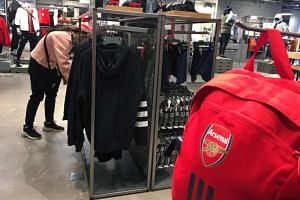 However, he continues to monitor goings-on at his old club very closely and admits to being saddened by Arsenal's current travails.

Wenger departed in May 2018 after 22 years in charge and his successor, Unai Emery, was sacked late last month. Former player Mikel Arteta is believed to be close to becoming the next manager.

Arsenal are currently 10th in the Premier League, seven points adrift of the Champions League places.

"When I left the club was in a very strong financial position and they bought many players in between," said Wenger of the changes at the club.

"They have not all worked out but it's not I believe a question of time, the change can be very efficient very quickly, and it is just about the right decision-making."

Arteta, who played for the club under Wenger and is currently Pep Guardiola's assistant at Manchester City, is just 37 and has not yet worked as a manager in his own right.

However, Wenger believes the Spaniard has a "great future".

"He has learnt a lot in his first position as an assistant coach, and after that he will have to deal with the fact that he has no experience at that level, and he will have to be surrounded well, have a good environment at the club.

"I think the most important thing is that every club - and Arsenal especially - is built on special values, and inside the club people have to take care of that."