Victory would have returned second placed Leicester to the Premier League summit, but Bastian Schweinsteiger equalised just before the interval to stretch United's unbeaten run to 10 games and keep them firmly in title contention.

But the fixture was all about Vardy, who took until just the 24th minute to produce the historic goal that the Leicester faithful, and many neutrals, were hoping for.

It made the England striker the first player in the history of the Premier League to score in 11 successive appearances, breaking the tie he had of 10 in a row shared with former Manchester United star Ruud van Nistelrooy.

It was a goal that illustrated the blistering pace possessed not only by Vardy himself but his team as a whole and came on the counter-attack from a United corner taken by Daley Blind and gathered by Kasper Schmeichel in the Leicester goal.

A quick break upfield ended with full-back Christian Fuchs playing a magnificent pass inside United defender Matteo Darmian for Vardy to chase, beat his marker and score with a superb finish under David de Gea.

The Leicester fans, who had greeted Vardy's every move and touch with great expectancy until that point, erupted in celebrating a goal that looked capable of returning Leicester to the top of the Premier League table. 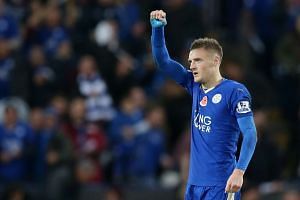 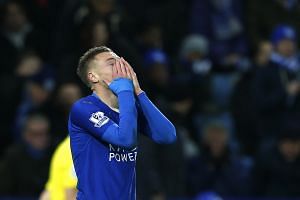 For all their critics, however, United have shown great resilience under Louis van Gaal, and were level before the interval, the equaliser coming from another right-wing Blind corner.

This time, the Dutchman's delivery was met by Schweinsteiger, who easily shrugged off the ineffective attempts of Shinji Okazaki to impede him, and powered a close-range header past the helpless Schmeichel.

That was the culmination of a half that had centred around Vardy, the former non-league player who has only been in the ranks of full-time professional football for three-and-a-half years.

After 14 minutes, his determination allowed him to dispossess Michael Carrick and set up N'Golo Kante for a shot which was deflected behind the United goal.

And just after the half hour, de Gea was forced to save with his legs from a Riyad Mahrez shot who then followed up by almost setting up Okazaki for a second goal.

Instead, it was United who finally began to grow into the game with Schweinsteiger missing their first decent opening, after 21 minutes, when his shot from an Anthony Martial cross was easily blocked.

There as more excitement for the home supporters soon after the restart as Marc Albrighton's lobbed pass almost found Vardy, the ball passing inches over his head.

But United were looking in more direct and determined mood with Schweinsteiger drawing a fine reflex save from Schmeichel with another powerful header, this time from an Ashley Young free-kick, and Wayne Rooney heading the rebound wide, albeit from an offside position.

Rooney was injured in the process and would soon be replaced by Memphis Depay as both sides pressed for a winning goal that would lift them above leaders Manchester City.

Mahrez launched another lightning attack and passed to substitute Leonardo Ulloa whose shot was kept out by de Gea, when a pass to the unmarked Vardy looked a better option, and the same striker failed with an ambitious high shot from outside the area.

Juan Mata saw a close-range shot deflected behind and Depay latched onto Darmian's neat header only to shoot well over.