"We are second - not fifth, sixth or seventh or eight," Mourinho told Sky Sports after his third straight loss at Stamford Bridge since he became United manager.

"We have several teams in a more difficult position than we have. Eight points is eight points.

"We went through a very difficult phase with important matches against Tottenham, Liverpool and Chelsea without important players." 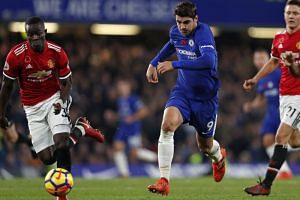 "We tried to change the direction of our game, we created chances to equalise but we couldn't.

"We had chances. If I remember (Romelu) Lukaku shot in the first half and in the last part of the game with the (Marcus) Rashford shot...We had lots of chances to score goals," Mourinho said.

Victory saw Chelsea move to within nine points of top spot and eased the pressure on the London club's Italian manager Antonio Conte following a 3-0 loss away to Roma in the Champions League earlier this week.

"It's an important victory," said Conte. "When you play against Manchester United it's always a massive game. This type of win is important for our confidence. We showed great desire and passion to win this kind of game.

"We can win or lose but our spirit must be this. Last season our spirit was in every game - we started this season with a lot of problems. We were up and down. This game showed if we want we can." Chelsea defender David Luiz was not even on the bench for this match and Conte was coy when asked if the Brazilian, in his second stint with the Blues, still had future with the west London club.

"I don't know," Conte replied. "He has to work really hard otherwise they are on the bench or in the stand." Meanwhile Chelsea midfielder Cesc Fabregas, who said the Blues might have won by an even bigger margin, was proud of the team's resilience.