Former England boss Hodgson was taking charge of Palace for the first time following his appointment on Tuesday as successor to the sacked Frank de Boer.

But Hodgson couldn't inspire an immediate upturn in Palace's fortunes, with Davis' goal condemning the Eagles to a piece of unwanted history. 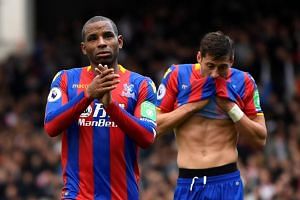 Palace sit bottom of the table after becoming the first English top-tier team to lose their opening five fixtures without scoring a single goal.

Worryingly for Hodgson, the last Premier League team to lose their first five games and still stay up were Southampton in 1998-99.

With de Boer axed just four games into his reign at Palace, Hodgson has returned to the club he played for 51 years ago, tasked with saving them from relegation while also salvaging his own battered reputation.

The 70-year-old was back in the dugout for the first time since his underwhelming spell as England boss ended with the humiliation of a Euro 2016 exit against minnows Iceland.

Born just down the road from Selhurst Park in suburban Croydon, Hodgson was greeted warmly by Palace supporters as he strolled along the touchline before kick-off.

But it took just six minutes for Hodgson's first experience of the Premier League since 2012 to turn sour.

The former West Bromwich Albion and Liverpool manager was left shaking his head in frustration when Dusan Tadic escaped down the right flank and crossed low into the Palace penalty area.

With the Palace rearguard too slow to close down the danger, Davis was able to steer his shot into the far corner.

It was the Northern Ireland midfielder's first league goal in 489 days, with his previous strike also coming against Palace.

Hodgson's team pushed hard for an equaliser, but Saints goalkeeper Fraser Forster made fine saves to deny close-range efforts from Christian Benteke and Jason Puncheon either side of half-time.

The statistics made grim reading for Hodgson as Palace set another unwanted top-flight record, surpassing the 438 minutes Newcastle went without a goal in the 2005-06 season.

Southampton held firm in the closing stages to clinch their first win since Aug 19.

Centre-back Virgil van Dijk came off the bench for his first Southampton appearance since asking to leave during a failed attempt to force a move to Liverpool before the transfer deadline.