SINGAPORE - Only three defenders have ever won the prestigious Ballon d'Or award.

Garcia, 41, was in town this week as a club ambassador for the launch of the Liverpool FC official club store at Bugis Junction.

When asked how far he felt 21-year-old Alexander-Arnold could develop, Garcia told The Straits Times on Friday (Jan 10): "Well, it's a long call yet.

"He's very young, he's got so much room to improve. We are so delighted to see how he's becoming better and better, and more influential in games, even from right-back.

"And yeah, why not? He could be one of those players to make history and get the Ballon d'Or playing as a defender."

The annual Ballon d'Or award, which was first awarded in 1956 and recognises the world's best player, is traditionally won by attackers.

German legend Beckenbauer bucked the trend when he won the Ballon D'or twice, in 1972 and 1976, as a libero, before compatriot  Sammer was also named the world's best player in 1996 playing as a sweeper. 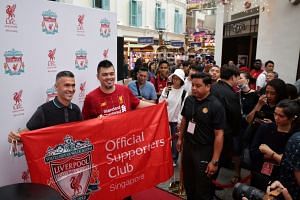 Liverpool defensive lynchpin Virgil van Dijk came close to joining the select group in 2019, but had to settle for being runner-up to Lionel Messi - who picked up his sixth award - after losing by just seven points. Alexander-Arnold was ranked 19th overall.

Born and bred, in Liverpool, the young footballer has racked up 30 assists and scored six goals in 114 games for the Reds across all competitions.

His most celebrated contribution for the club so far was his quick-thinking assist for Divock Origi to score the final goal in a 4-0 win over Spanish giants Barcelona in the second-leg of last season's Champions League semi-final, sealing a 4-3 aggregate win. Liverpool went on to lift their sixth European title.