MANCHESTER (REUTERS) - Manchester United were held to a 0-0 draw by Valencia in a dour Champions League Group H clash at on Tuesday (Oct 2) which piled more pressure on their under-fire manager Jose Mourinho amid reports linking former Real Madrid coach Zinedine Zidane to his job.

The result left United second in the group on four points from two games, two behind leaders Juventus who maintained their perfect start with a 3-0 home win over Young Boys. Valencia have one point and Young Boys none.

The atmosphere at Old Trafford was rather flat as United lacked any bite in a contest played at walking pace, with the visitors content to keep them at bay with crisp one-touch passing.

Things livened up slightly after the break and Valencia, always looking more likely to score, missed their best chance when former Chelsea striker Michy Batshuayi blasted over the bar from close range.

Romelu Lukaku forced a pair of good saves from Neto and the visiting keeper also palmed over a Paul Pogba free kick at the other end as United finally showed some purpose up front midway through the second half.

Marcus Rashford hit the crossbar with a vicious free kick from a tight angle in the 86th minute but the home side were jeered off the pitch on the final whistle after another lacklustre performance.

It was United's fourth successive winless outing following a 3-1 Premier League defeat by West Ham on Saturday which came on the back of a 1-1 home draw with Wolverhampton and League Cup elimination by second-tier Derby County. 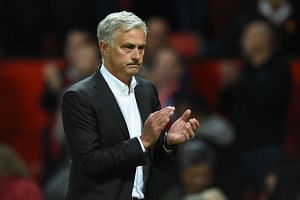 United are up against Juventus in their next two Champions League games, as they will host the Italian giants on Oct. 23 before the reverse fixture in Turin on Nov 7.