The adrenaline was clearly still coursing through his veins as his team scored two last-gasp goals in added time to beat Nagaworld FC 4-2 in their Asian Confederation Cup (AFC) Group F match at Jalan Besar Stadium on Wednesday (April 17).

With the win, the Stags cemented their place at the top of the group with 10 points, three ahead of second-placed Hanoi FC who beat Yangon FC 5-2 yesterday.

Said Kadir: "We really tried to attack from the start and we could see the opponents trying to defend as much as they could, to try and break the deadlock... I think we deserved to win tonight."

Tampines took the lead in the third minute when Zehrudin Mehmedovic slid a defence-splitting pass to Irwan Shah, who made no mistake with a clinical finish.

But the Cambodian team pulled level in the 14th minute through midfielder Kouch Dani.

The home team thought they had the win in the bag when Yasir Hanapi scored with a half volley in the 87th minute, but Nagaworld equalised again through Omogba Esoh on the stroke of full-time. 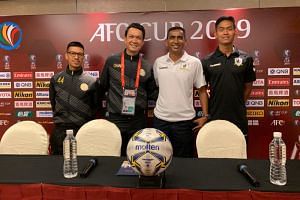 AFC Cup: Tampines Rovers revitalised by break, ahead of clash with Cambodia's Nagaworld

There was still time for some late drama, though, as Tampines striker Khairul Amri sent the 1,283 spectators into delirium with a superb overhead kick in the 91st minute.

Jordan Webb then made sure of the three points with the final goal just seconds before the final whistle.

Describing the final 10 minutes as "unbelievable", Kadir added: "It's good for the fans on both sides but, from a coach's point of view, I was quite angry with the goals we conceded.

"After we scored a goal, we lost concentration and this is our main problem that we have to address."

The Stags next play Yangon FC at Jalan Besar Stadium on May 1, before their last group match away to Hanoi FC on May 15.

Kadir added: "We need to be more clinical in front of goal. If we progress, we're going to expect much better teams and much better defence."