SINGAPORE - It was tactical cat and mouse in the Singapore Premier League (SPL) on Friday (March 29) as leaders Tampines Rovers laid siege but had to settle for a 0-0 draw against Albirex Niigata.

Fireworks were expected from this fixture as the Stags, with 11 goals from three games, faced last season's undefeated champions but, in the end, the White Swans' defence held firm before 2,745 fans at Our Tampines Hub.

For Tampines, chasing a first league title since 2013, it was a case of two points dropped rather than a precious point earned.

A disappointed Stags coach Gavin Lee said: "It's two points dropped. We could argue that they (Albirex) had chances), but we should have taken our chances.

"But we will get better with more training and, knowing these boys, they will rebound quickly."

White Swans coach Keiji Shigetomi found some satisfaction in his team's defensive strength, saying: "They (Tampines) can have the ball but not in our vital areas. We have played them in a pre-season friendly (losing 4-0) and we understand their attacking threats.

"Our plan was to block all their avenues of attack."

The result keeps Tampines top of the nine-team SPL standings on 10 points from four games, three ahead of Brunei DPMM, who have a game in hand. Albirex are sixth with two points from three games.

With two top-billed clubs with reputations for attacking football clashing, it turned out that Albirex, who have yet to score this season, who dug in to repel waves of attacks from the Stags in yellow jerseys. 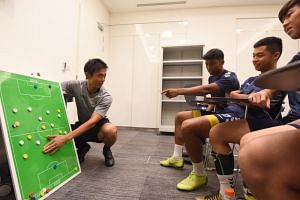 Lee applied pressure through his wingers - Jordan Webb and Ryutaro Megumi - using their speed and skill and even with the duo swopping flanks throughout the game, the White Swans' sea of bodies did not part.

Webb came close in the 19th minute, nicking the ball off defender Shuhei Sasahara but curling wide from an acute angle.

Yet, Lee found himself literally facing a tactical dilemma - pour forward in search of the win or leave the team exposed to counter-attacks.

"Everyone could see that Albirex came with a clear game plan. We predicted that but unfortunately we could not get into a rhythm in the first half," Lee said.

"We gave Albirex a few more problems in the second half. It wasn't easy as they were looking to hit us on the break. In the end, it was an even game."

Despite ending Tampines' three-game winning streak, Albirex finished the game with some regrets, too.

Shigetomi added: "I'm more frustrated with no goals being scored. We have taken a clean sheet against Tampines, but we still need to work hard on our attacking play.

"The players have to work more on their finishing, be more ruthless, more decisive and improve their accuracy."

Shahir Hamzah and Masnashzreen Masturi from Yishun Sentek Mariners allowed "unknown persons" to impersonate them and take the test, which all players in the amateur second-tier league have to pass before being registered to play, on their behalf on March 16.

Photographic and video evidence were collected to prove their guilt and both players were banned from being registered in any FAS organised or sanctioned competitions until the end of the 2021 season.