BELFAST (AFP) - Switzerland took a giant step towards qualifying for Russia 2018 on Thursday but needed a controversial penalty to earn a 1-0 win against stubborn Northern Ireland in the first leg of their World Cup play-off.

Vladimir Petkovic's team dominated the match at Windsor Park in Belfast but squandered a succession of chances as Michael O'Neill's team held them at bay in a backs-to-the-wall performance.

The key moment came with just over half an hour to go, when Xherdan Shaqiri's volley from range was blocked by Corry Evans just a few yards away in the box and the referee pointed to the spot, even though the ball struck him on his shoulder as he took evasive action.

Ricardo Rodriguez made no mistake from the penalty spot, sending Michael McGovern the wrong way as the visitors finally made their superiority count to put them in the driving seat in the two-legged tie.

Shaqiri said he did not know whether it was a penalty or not.

"I tried to get a shot on target and I don't know if he touched it with his hand or not. In the end the referee gave the penalty," he said. "That is football. 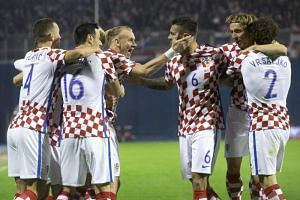 Football: Croatia see off Greece to close in on World Cup

"We controlled the game over 90 minutes, had a lot of possession and created chances. We played much better than Northern Ireland and deserved to win." But O'Neill raged at the decision, saying he did not understand how the referee could award the spot kick.

"The referee has no-one in his line of sight," he said. "Corry's arm isn't in an unnatural position, it's by his side. The ball hits him on the back more than anything. I thought the referee had blown for a foul or an offside. Nobody had claimed for it." "I'm staggered by the decision, staggered by the yellow card but there's nothing we can do about it now," he added. "There's anger in the dressing room in there. They feel very aggrieved about what's happened."

O'Neill also said Fabian Schaer deserved a red card for a reckless tackle on Stuart Dallas in the opening minutes, adding: "The referee hasn't done us any favours." The Swiss are unlucky to find themselves in the play-offs after winning nine of their 10 games in Group B but were pipped to top spot by Portugal.

Emerging to a sea of green and white flags, Northern Ireland started brightly in a raucous atmosphere and Schaer was lucky to escape with just a yellow card after his studs-up challenge on Dallas.

But the visitors quickly found their rhythm. Granit Xhaka had a couple of chances before Haris Seferovic latched onto the end of a fine cross from the impressive Shaqiri but McGovern saved smartly.

Despite dominating possession, Switzerland could not find a breakthrough as Northern Ireland, who conceded just six goals in their qualifying campaign, survived until the break.

Within seconds of the restart Shaqiri came close to breaking the deadlock with a curling left-footed effort that whistled just over and Seferovic was inches away from getting his boot to a cross.

But the away side needed a lucky break to finally edge ahead and it came courtesy of the soft penalty, which also saw Evans booked, meaning he will miss Sunday's second leg in Basel.

Northern Ireland, who posed a threat from set-pieces, had a good chance to equalise when Josh Magennis connected with a free-kick from Chris Brunt but he steered his header wide.

Northern Ireland, who finished a distant second in Group C behind world champions Germany, are aiming to reach their first World Cup finals since 1986 and just the fourth in their history, while Switzerland have reached the past three tournaments.