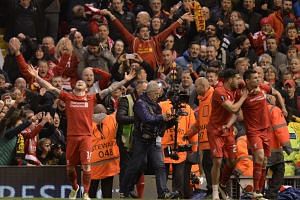 Sam Allardyce's side would have been on the brink of crashing into the Championship if they had lost at Carrow Road, but Borini's first-half penalty and strikes from Defoe and Watmore after the interval significantly improved their hopes of staying up.

We showed that we can beat any team if we play football like we know. We know we've put pressure on the others but we need to focus on ourselves.

FABIO BORINI, Sunderland striker, on their hopes of avoiding relegation from the Premier League.

Sunderland remain in the relegation zone after their first win in seven matches, but they are now only one point behind fourth-bottom Norwich, with a game in hand.

Allardyce has never been relegated from the top flight and he could be on course to mastermind another great escape to emulate Sunderland's last-ditch revival under Dick Advocaat 12 months ago.

For Norwich, it was a further setback to their survival bid after last weekend's loss at Crystal Palace and they face a nervous last four matches as the relegation struggle goes to the wire.

Sunderland had threatened in the first half when Jan Kirchhoff flicked a free kick into the path of Fabio Borini, but the Italy striker's shot flashed just past John Ruddy's far post.

Defoe picked out Borini in the penalty area and when he cut back inside to attack Andre Wisdom, the Norwich central defender got the slightest touch on the ball before following through to catch the Italian with an ugly tackle that convinced referee Andre Marriner to point to the spot, which Borini took full advantage of.

Sunderland struck again in the 53rd minute, Borini whipping over a sublime cross that Defoe met with a typically predatory sliding finish at the far post.

The Canaries laid siege to Sunderland's goal in the closing stages without success as Lee Cattermole cleared off the line from Dieumerci Mbokani and then Wes Hoolahan.

Watmore rubbed salt in Norwich's wounds in stoppage time when he took Seb Larsson's pass and clipped a near-post finish past Ruddy.

"We showed that we can beat any team if we play football like we know," said Borini.

"We know we've put pressure on the others but we need to focus on ourselves."