Rashford marked his 150th appearance for United with an outstanding goal as they defeated Brighton 2-1 in the Premier League at Old Trafford on Saturday (Jan 19).

England forward Rashford's 41st goal for the club came six days after he scored the winner against Kane's Tottenham at Wembley, and he now has seven goals in his past 10 appearances in all competitions.

England captain Kane damaged ankle ligaments against United, and is not expected to return to training until early March.

Solskjaer implied Kane, when fit, is the best centre-forward in England's top division, but suggested Rashford, 21, is increasingly showing his potential to be a top-class striker too.

"You can argue for many strikers but I'm glad he's in my team," said Solskjaer, himself a former United forward.

"Harry Kane's injured, so maybe that gives him (Rashford) a better chance to be the best at the moment.

'BEST FOOTBALL OF HIS CAREER'

The Norwegian added: "He finishes, he tries to shoot, he doesn't think twice about it. At the moment, I think he's playing the best football of his career."

United's win was their seventh in a row in all competitions, as Solskjaer became the first manager in the club's history to win his first six league matches in charge.

Their run has pushed them back into contention for a top-four finish, which would secure qualification for next season's Champions League. 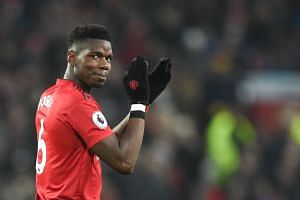 However, despite going 2-0 up before half-time, with Rashford's goal following a Paul Pogba penalty, United endured a nervous finish after Pascal Gross scored for Brighton with 19 minutes left.

Solskjaer, appointed after United sacked Jose Mourinho, accepted the team were still a work in progress.

"We need to improve a few things," he said.

"Defensively, we need to find our shape better. We need to defend better with the ball.

"We were under the cosh, we were winning 2-1, so keep it away from the opposition, let them run.

"At times today, though, we played some fantastic football. We could have scored two or three in the second half."

Brighton, in 13th place, have won just one of their past eight league matches, but showed enough in defeat to suggest they have the quality required to stay clear of trouble.

Chris Hughton's south coast side are seven points clear of the relegation zone, and face Fulham, Watford and Burnley in their next three league fixtures, following next weekend's FA Cup fourth-round tie against West Brom.

Hughton was annoyed by the way Brighton conceded two goals at Old Trafford, full-back Gaetan Bong failing to stop Pogba's run before fouling him for the penalty, while Gross did not get close enough to prevent Rashford from making it 2-0.

The Brighton manager could also reflect on the fact that top-scorer Glenn Murray lashed a clear first-half chance wide, when they trailed by only one goal.

"We're playing against a Manchester United team in very good form at the moment," said Hughton.

"They're probably pressing higher, and they've got a really good momentum at the moment.

"That's why you know you've got to defend really well against them, and certainly not give away what I would regard as disappointing goals."

The Seagulls boss added: "But as with any team that want to press high with the energy that they do, there are areas to exploit."