Outspoken TV pundit Neville had said in a podcast after United's 2-0 defeat at leaders Liverpool on Sunday, which left the Red Devils 30 points behind their rivals in the Premier League, the club was in a mess.

The former United captain pinned much of the blame for the team's current problems on the recruitment undertaken by chief executive Ed Woodward.

But with United still fifth in the league and competing in three cup competitions, Solskjaer believes it is not the right time to start a blame game.

"We've just lost to Liverpool, who you all say are fantastic and we have been in the game until the last kick of the ball," he said at his press conference on the eve of United's Premier League game with Burnley on Wednesday.

"For me, that is strides forward.

"The signs are there that we're on the right track, definitely.

"For me, now is not the time to talk about recruitment.

"We are always looking to improve the squad, so now is not the time to start that discussion, Gary." Fighting for fourth place - the final Champions League spot - is not what is expected of a club of United's stature, but the manager remains confident they are doing things to rectify that.

"We know we're not where we want to be and should be, historically," he admitted.

"It's down to us to work better and from my experience in the 12, 13 months I've been here, the players that I've brought in have been good, so I have no complaints whatsoever." - Rashford's 'new injury' - On the pitch, United will give Marcus Rashford all the time he needs to recover from a double stress fracture to his back. 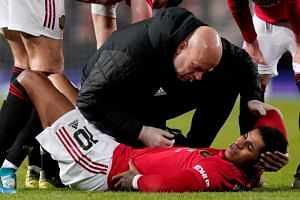 United to seek short-term fix in light of Rashford's injury

Rashford picked up the injury in the 1-0 win over Wolves in the FA Cup replay last Wednesday, and will miss at least three months.

The England striker, who has scored 19 times for United this season, had been monitoring his back following the away match at Burnley on December 28, but Solskjaer says it was not a previous injury.

"Marcus will be out for a while, but he will get the time he needs to recover," he said.

"He's not had that injury before.

"He complained a little bit after the last time we played Burnley.

"We managed him as well as we could then.

"He had some days off for treatment, we took him off in some games and then suddenly this was a new injury." Solskjaer must now decide whether to make a late move in the transfer window for a striker to cover for Rashford's absence.

If he cannot bring anyone in, the Norwegian will look to 18-year-old Mason Greenwood and veteran midfielder Juan Mata - who scored the goal that knocked Wolves out of the FA Cup - to try and plug the gap.

"Mason will get more chances now and Juan will have to step up again," he said.

"We know we're stretched with the injuries we've had but we'll cope with that."