LONDON (REUTERS) - Alexis Sanchez is completely committed to Arsenal and will quickly win over any doubting fans, manager Arsene Wenger said after his side cruised to a comfortable 3-0 Premier League victory against Bournemouth on Saturday (Sept 9).

The Chilean, who was strongly linked with a move to rivals Manchester City during the summer, came off the bench in the 75th minute and, although he received a standing ovation from the majority of the 60,000 fans inside the Emirates Stadium, there were what appeared to be a few jeers audible.

"Alexis Sanchez is very focused on the Premier League and the Europa League and he wants to do well," Wenger told the BBC.

"He is still a bit short physically. He will be quickly back to his best. He will win the fans back, and win them back very quickly."

With the effervescent Sanchez yet to return to full fitness after injury and illness, Arsenal's attack was spearheaded by the brilliant Danny Welbeck - who scored a brace - and record signing Alexandre Lacazette, who added a stunning goal of his own. 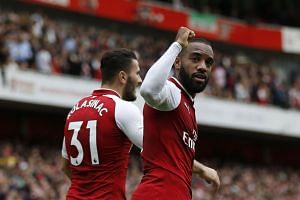 Football: Arsenal bounce back from successive defeats with 3-0 Bournemouth victory

"Before every game I have a selection problem and I'm always going to have to leave top-class players out - especially offensively because we have many top strikers," Wenger told reporters.

"I think Welbeck is getting stronger and stronger, and let's not forget he was out for a long time. He's a team player and the coaches love him.

"He's a guy with huge physical potential and even though people are not completely convinced he is a great finisher, these kind of goals will help him get more relaxed in front of goal. I liked his second goal today, because it's really clean finishing for any goalscorer.

Wenger added: "Confidence is so important in sport and the best way to get it is to perform like we did today. It was a serious performance. We played well all over the pitch."

Francis Coquelin limped off towards the end of the game and Wenger said that Jack Wilshere, who spent last season on loan at Bournemouth and has an uncertain Arsenal future, could benefit from the Frenchman's absence.

"Jack is getting stronger and stronger," Wenger said. "Now that Francis is out he has a chance. I don't know if he's ready (for Thursday's Europa League tie against Cologne) but he's not far away from that."