However, victory came at a cost with Mohamed Salah limping off injured late on with an injury caused by Hamza Choudhury's lunge.

"It's a challenge which I really don't understand," said Liverpool manager Jurgen Klopp, who believes Choudhury should have been sent off rather than just shown a yellow card.

"He is a player who is at full sprint, to bring him down without the ball around, for me it is only one colour (card).

"He's a super player, super development in the last one or two years at Leicester, but these kind of challenges, no. I don't know how that can not be red."

Salah later limped out of the stadium with what appeared to be an ankle injury, although Klopp did not immediately know the extent of his problem.

It was another twist in a dramatic game in which James Maddison's 80th-minute equaliser looked like it would be enough to see Liverpool drop a league point for the first time since a draw with Everton at the start of March.

But Marc Albrighton rashly tripped Sadio Mane, two minutes into the four added on, and, after a routine VAR check, Milner calmly converted the spot kick.

The drama did not end there as after the final whistle there were angry scenes with players from both sides squaring up, including a heated exchange between Ayoze Perez and Andy Robertson. 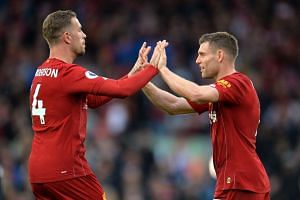 "According to the guys, Andy Robertson on the final whistle celebrated and pushed him which he probably didn't expect," said Leicester manager Brendan Rodgers.

"He was obviously annoyed at that and that leads to a melee."

It was a frantic conclusion to proceedings as, 10 minutes from time, superb link-up play from substitutes Albrighton and Perez had slipped in Maddison who beat goalkeeper Adrian with a clinical finish from 15 yards.

Rodgers was making his return to Anfield for the first time since being sacked by Liverpool four years ago and Leicester showed why they will post a strong challenge to finish in the top four this season.

However, they were undone by a moment of magic from the European champions five minutes before half-time.

Mane scored his 50th Premier League goal for Liverpool in his 100th appearance, but the goal owed much to Milner's vision.

Robertson's pass was sent forward by Milner, a perfectly-weighted assist that curled tantalisingly beyond defender Jonny Evans to play Mane clear and allow him to beat Kasper Schmeichel.

"Sadio is an absolutely exceptional player," said Klopp, who praised Mane's persistence despite struggling with an injury himself.

"Even though he is obviously not in good shape at the moment, he was still there in a really, really tough game in and around those situations. That's good."