LISBON (AFP) - Captain Cristiano Ronaldo left the field with a thigh injury as Portugal drew 1-1 against Serbia in an Euro 2020 qualifier on Monday (March 25).

Ronaldo was replaced after 30 minutes in Lisbon as Fernando Santos' reigning European champions drew for a second time in their opening two games of the campaign after they were held by Ukraine on Friday.

There was no word whether the five-time Ballon d'Or winner would be fit for to play for his club Juventus in the first leg of their Champions League quarter-final at Ajax on April 10.

Serbia failed to clear the ball in the box before it fell to the unmarked Real Betis midfielder who's side-footed shot glanced past the post after five minutes.

Wolves goalkeeper Rui Patricio collided with an advancing Mijat Gacinovic in the box and Tadic tucked the spot kick away with ease to take a shock lead over the Euro 2016 winners. 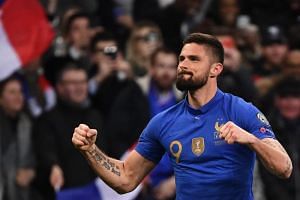 The 156-time international left the field on the half hour mark after he pulled up chasing a ball on the left wing.

He received quick treatment from members of the medical team before returning to action but was replaced by Pizzi minutes later as Pepe took over the skipper's armband.

The visitors were level with three minutes of the first half to play.

Porto's Danilo Pereira hammered his shot from outside the box into the top corner past a helpless Dmitrovic.

Carvalho should have put his side into the lead 25 minutes into the second half.

Guerreiro chipped a cross to the back post, Bernardo Silva then played it into the middle of the box but Carvalho couldn't make a solid enough contact with the ball to challenge Dmitrovic.

The hosts pressed on for the winner in the closing ten minutes but Mladen Krstajic's outfit defended stubbornly to claim a point in their first game of the campaign.

Next for Portugal is a Nations League semi-final against Switzerland on June 5 and Serbia travel to Kiev in a Euro 2020 qualifier two days later.