EIBAR, Spain (AFP) - Cristiano Ronaldo came to the rescue again as Real Madrid followed up their thumping win over Paris Saint-Germain with a narrow victory against Eibar.

He scored twice, the second six minutes from the end, as Real won 2-1 and avoided another slip-up in LaLiga. Ivan Ramis had equalised for Eibar shortly after half-time.

His double means Ronaldo has now scored in seven consecutive games and has a remarkable 13 goals overall in that period.

Real move four points behind second-placed Atletico Madrid, who will restore that gap to seven with a win over Celta Vigo on Sunday. Eibar stay eighth.

After securing a 5-2 aggregate victory over Paris Saint-Germain on Tuesday, Real swopped the Parc des Princes for the Ipurua Municipal Stadium, the smallest in LaLiga with a capacity of just over 7,000.

They were below their best and rode their luck late on when Eibar should have converted a pair of excellent chances.

But Ronaldo proved the difference again, the 33-year-old taking his tally for the season to 35 goals in 37 appearances.

Zinedine Zidane had insisted the success in Paris was now "forgotten" and his starting line-up suggested as much, with Karim Benzema the only key player rested.

Gareth Bale started up front alongside Ronaldo, while Luka Modric and Toni Kroos, fit enough only to come off the bench in midweek, returned.

Isco and Casemiro formed the top and tail of a midfield diamond. 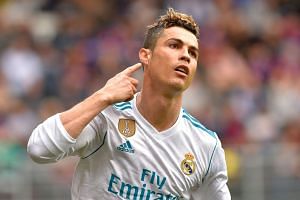 Ronaldo 'from another galaxy', says Zidane 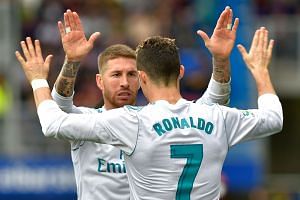 Football: Ramos leaves Real match to go to the toilet

Real were ragged early on as Takashi Inui, Kike Garcia and Joan Jordan all went close to giving Eibar the lead.

Raphael Varane had to be replaced by Nacho after taking a bang to the head and, against the run of play, Real edged ahead in the 33rd minute.

A sloppy pass out from the back by Anaitz Arbilla conceded possession to Modric who quickly picked out Ronaldo with a sublime bending pass. The Portuguese star chested the ball down and slammed it in at the near post.

In front, Real improved but five minutes into the second half and Eibar were level. Sergio Ramos lost his man at a corner and Ramis nodded in from six yards.

Ronaldo should have restored the advantage but failed to convert an excellent Bale cross and from the resulting corner, Bale flashed a glancing header just wide of the post.

Isco and Kroos made way for Benzema and Lucas Vazquez with 19 minutes left but Eibar had two golden chances to score a second.

First, the unmarked Inui headed over from seven yards out and then Kike hit the side-netting with only Keylor Navas to beat. They would soon prove costly misses.

In the 84th minute, Pedro Leon gave away possession too easily, allowing Modric to feed Daniel Carvajal out wide. His whipped cross found the leaping Ronaldo and the Portuguese made no mistake.