MADRID (AFP) - Real Madrid coach Rafael Benitez believes his side can still have a successful season if Cristiano Ronaldo, Karim Benzema and Gareth Bale can remain fit and on form.

Madrid suffered the latest embarrassment of a disappointing campaign so far by being dumped out of the Copa del Rey in midweek for fielding an ineligible team by naming a suspended player in Denis Cheryshev away to Cadiz on Wednesday.

However, Benitez's men bounced back from that blow to smash four goals past Getafe in the first 38 minutes to seal a 4-1 win and move to within three points of Barcelona at the top of La Liga ahead of the European champions' visit to Valencia on Saturday.

Benzema scored his first two goals since becoming embroiled in a sex-tape blackmail scandal in his native France in a case involving international teammate Mathieu Valbuena.

And Bale and Ronaldo also got on the scoresheet as Madrid's star front three scored in the same game for the first time this season. 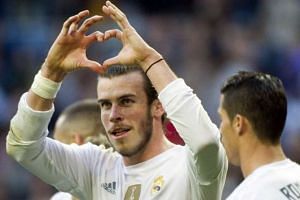 "To get the three points playing very well in the first half means that these players, who we know are very important, once they get up to speed can cause a lot of damage to any defence," said Benitez.

"The fact the three attackers all scored and collaborated a lot with the team in defence and attack I think means all three should be satisfied.

"It is important that they play well, score goals and that will be the key to maintaining their confidence."

Both Benzema and Bale have missed large parts of the season through injury as they partnered Ronaldo up front in the league for just the fourth time this season.

Benzema's problems off the field have also mounted in the time he has been sidelined by a hamstring injury as he spent a night in custody last month and was charged with complicity to blackmail and conspiring to commit a criminal act in the case involving Valbuena.

However, whilst many in France, including Prime Minister Manuel Valls have questioned whether Benzema should return to the national team, Madrid and Benitez have offered the former Lyon striker their full support.

And Benitez believes concentrating on his football can help Benzema deal with his off-field problems.

"The fact Benzema scored those two goals and contributed so much to the team going forward reinforces more what I have said before that he is a very important player for us and makes those around him play better," added Benitez.

"We spoke this week and he was desperate to play and score goals. He needs to play well on the field because that will help him confront any problem."

Madrid's Cup elimination was just the latest blow in a nightmare couple of weeks for the club after being thrashed 4-0 at home by Barcelona in their last league outing at the Bernabeu.

However, Benitez insisted his side are still well-placed to compete in La Liga and the Champions League this season.

"We need to know that with social networks it allows all sorts of people to make their opinions known without really knowing what is going on inside the club," said Benitez.

"I said the other day the team is in much better shape than people think and we showed that in the first-half.