MADRID (REUTERS) - Real Madrid favourite Zinedine Zidane returned for a second spell as coach on Monday (March 11) with plans to rebuild the Spanish football giants, who have fallen into crisis since he left in May after winning an unprecedented third straight Champions League title.

Zidane also won a Liga title in 2017 among nine trophies before standing down, having taken the club to the European summit, but they have endured a miserable season in his absence, first sacking Julen Lopetegui and then Santiago Solari.

Real president Florentino Perez has turned again to Zidane, who stepped in for Rafael Benitez in 2016 and quickly guided the team to Champions League glory, but this time he will be without the club's all-time top scorer Cristiano Ronaldo.

The Portugal forward's departure in July to Juventus has had a big impact on Real this season while their other key players, like Marcelo, Isco and Gareth Bale, have struggled and Zidane has a big job on his hands as he prepares to shake things up.

"Things will change, in every way. We have to change things for the years to come," he told a news conference on Monday at the Bernabeu. "Now the important thing is that I am back, and there is time to talk and see what needs to be done."

Perez explained that Zidane's return was to help restore the club's pride after a painful year.

"This season, we have not got the results we wanted and our responsibility is to put into action the reaction the team needs," he said at Zidane's presentation. 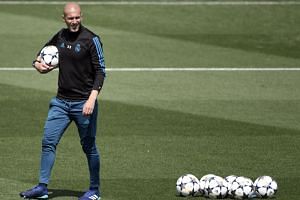 The Frenchman must oversee a regeneration by using the young players Solari brought through, including 18-year-old forward Vinicius Junior, left-back Sergio Reguilon and midfielder Marcos Llorente, as well as welcoming major new signings.

Chelsea's Eden Hazard is likely to be a prime target, with the Belgium forward having previously spoken of his admiration for Zidane, who won the World Cup as a player with France.

"Everyone knows the respect I have for Zidane as a player but also as a manager, he was my idol," Hazard once told Belgian TV. "To play under Zidane would be a dream."

Spanish newspaper Marca ran a poll on Monday with 56 per cent of over 128,000 respondents saying Hazard should be Real's main transfer target, with Tottenham Hotspur's England striker Harry Kane in second place on 10 per cent and Neymar third with nine.

Diario Sport reported that Paris Saint-Germain's Neymar, once of Barcelona, is Madrid's big transfer target as they bid to fill the hole left by Ronaldo and are willing to spend up to €350 million (S$534.15 million) on the Brazil forward.

"Zidane's French, so maybe he can do something about (signing) Mbappe," said the Real Madrid chief.

In Marca's poll, 74 per cent of fans voting said the attack was the area of the team in most need of reinforcement.

But Madrid have also struggled in midfield this season, with German international Toni Kroos and Ballon d'Or winner Luka Modric, a World Cup runner-up with Croatia, not at their best.

Zidane must now evaluate his squad before deciding if Madrid need to reinforce the midfield as well as which of the players frozen out by Solari can be brought back into the fold.

Spanish international midfielder Isco was a key player for Zidane, especially in 2017 playing in the hole behind Ronaldo and Karim Benzema as Madrid charged to a La Liga and Champions League double, but fell out of favour the next season.