(REUTERS) - Jose Mourinho hailed Marcus Rashford's late contribution against Hull City on Saturday (Aug 27) and hinted that the 18-year-old has a big role to play for Manchester United this season.

The teenager's lively cameo was his first league outing under Mourinho, and the Portuguese coach was impressed with the forward after his bold play had previously helped turn the tide in the Community Shield victory over Leicester City on Aug 7. 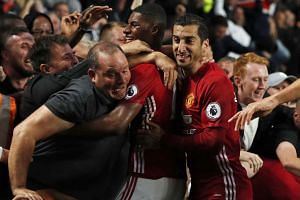 "In the two matches when we have needed a winner, against Leicester and today, he has done the job," Mourinho told journalists.

"He's playing well at 18 but our number one striker is such a good player.

"We play now with a second man behind Zlatan (Ibrahimovic)," Mourinho continued.

"We can start some matches with a player in front of Zlatan.

"The kid is going to play lots of matches, for sure."

Rashford scored five goals in 11 league appearances last season and was a surprise inclusion in England's World Cup squad after scoring on his international debut against Australia.

"It's not the winner that has made me change my mind (about the role Rashford will play this season)," the coach added. "He can play (or) he can be on the bench."

The win takes United up to second in the Premier League on nine points, level with Mourinho's former club Chelsea.