PARIS (REUTERS) - Neymar still has a “small chance” of playing against Real Madrid in the Champions League and there are no plans for an operation on his cracked bone, Paris Saint-Germain coach Unai Emery said on Tuesday (Feb 27).

“For Neymar there has been no decision to have an operation,” said Emery, denying an earlier report in the Brazilian press that the world’s most expensive player would go under the knife to fix the cracked bone in his foot.

“Neymar is the first to want to play every match, he’s very focussed on Real. I think there’s a small chance that he’ll be ready for the match,” added Emery.

PSG trail 3-1 from the last 16 first leg in Madrid two weeks ago and the loss of Neymar would be a huge blow to their chances of overturning that deficit at the Parc des Princes on March 6 and reaching the Champions League quarter-finals.

Neymar suffered a cracked metatarsal in his foot and a twisted ankle in an innocuous looking incident against Marseille on Sunday night.

And while Spaniard Emery said there is a possibility he’ll recover by next week, he was more pessimistic than he had been on Sunday night.

“Today, after analysing Neymar, it looks less likely than it did on Sunday that he’ll be ready for this match,” said Emery.

However, he was clear in his dismissal of a report published by Brazilian newspaper Globo Esporte on Tuesday morning that claimed a decision had already been reached for Neymar to undergo an operation, and that he would be out until May.

“Last night (Monday), the club issued an official statement: it said how the player was medically,” said Emery.

“You need discussions with the doctor, the player, his entourage.

“To make such an important decision you need tranquility and a bit of patience.

“Right now, I don’t think you need anything else. There’s a lot of information from outside, but the truth is what I told you, which is what the doctor told me.”

While PSG’s primary concern is having the world’s most expensive player available for their Champions League match next week, in Brazil it is Neymar’s participation at the World Cup that is most pressing. 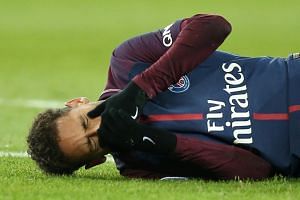 Football: PSG sweat over Neymar injury ahead of return leg against Real Madrid

The 26-year-old captained Brazil to their first ever Olympic gold medal 18 months ago on home soil and is seen as crucial to their hopes in Russia in June and July.

Were he to undergo an operation now and return to fitness in May, that would suit Brazil, who could then rely on a fully fit and fresh Neymar for the World Cup. Four years ago, Neymar missed the semifinal against Germany with injury and Brazil were thrashed 7-1.

Globo had said Neymar would have a “pin” attached to his metatarsal bone and would be fit to return in May.

Recovery from metatarsal injuries usually take weeks, if not months.

Just last year, Neymar’s international team-mate Gabriel Jesus was out of action for two months after breaking a metatarsal playing for Manchester City.

Former England stars David Beckham and Wayne Rooney spent six weeks on the sidelines with metatarsal injuries in the past.

Earlier on Tuesday, AFP spoke to a number of medical experts who all set a downbeat tone.

“It would be very risky as it’s a fragile bone in the foot which is difficult to protect,” said Jean-Marcel Ferrat, a former doctor with the France national football team.

“(Playing against Real) could compromise the rest of his season.”

“It will all depend on his treatment but what’s sure is that he wouldn’t be at 100 per cent (in eight days),” added Gosp Server.