LONDON (REUTERS) - Tottenham Hotspur manager Mauricio Pochettino said on Tuesday (Dec 18) that he was committed to delivering results in his current job, in comments that may do little to quell speculation about him replacing the sacked Jose Mourinho at Manchester United.

Pochettino has emerged as bookmakers' favourite to succeed Mourinho, with the Argentine viewed as a suitable long-term candidate to deliver attacking football and develop young talent at Old Trafford.

The 46-year-old told a news conference he was saddened by Mourinho's departure, and he dismissed what he described as "rumours" over his own future. But he did not flatly deny any interest in replacing the Portuguese.

"I went to send my best wishes to him, I'm so sorry. I have a good relationship with him... he's a good friend and it's sad news," Pochettino told a news conference.

"The business you know very well - a lot of rumours happen. I think after nearly five years there's a lot of rumours about my position as manager at Tottenham. I cannot answer this type of question.

"It's not my business what happens in another club now. I'm focused on training and delivering my best result in this club (Tottenham)."

Pochettino, who joined Tottenham from Southampton in 2014, has guided the club to consecutive top-three finishes in the Premier League, but he is yet to win a trophy. 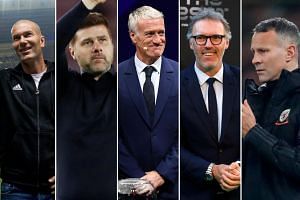 Former United skipper Gary Neville pointed out on Tuesday that while Pochettino had not picked up any silverware in England, he had a number of qualities that would appeal to United fans.

"My view is they need someone who meets the three key principles of the club - promotion of youth, entertaining football, and to win matches," Neville told Sky Sports.

Pochettino shrugged off the suggestion lightly.

"Of course I respect the opinion of everyone. But people say different things," Pochettino said.