LONDON (AFP) - West Ham co-owner David Sullivan has warned Dimitri Payet there is no chance he will allow the unhappy France star to force his way out of the Premier League club.

Payet stunned West Ham boss Slaven Bilic this week when he admitted he wants to leave during the January transfer window and wasn't willing to play against Crystal Palace on Saturday (Jan 14). 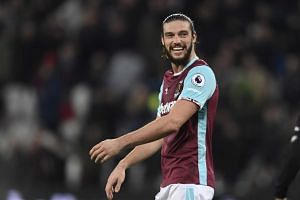 But Bilic has made it clear he is determined not to lose Payet, who was superb for the Hammers last season before going into a sustained dip this term.

Sullivan agrees with Bilic's stance and appears to be digging his heels in regardless of Payet's strike threat.

Writing in his programme notes ahead of the Palace match, Sullivan said: "The board's position is that we do not want to sell Dimitri, we do not need to sell Dimitri for financial or any other reasons, and we will NOT sell Dimitri in the January transfer window.

"All we ask now is that he shows the same level of commitment to West Ham United as the club and the fans have shown to him by honouring his contract."

Many West Ham fans are furious with Payet and a steward was placed in front of a mural of the midfielder outside the London Stadium to prevent it being vandalised on Saturday.