MANCHESTER (AFP) - Paul Pogba has the qualities to be captain of Manchester United, according to caretaker manager Ole Gunnar Solskjaer, who has overseen a dramatic return to form for the World Cup winner.

The France midfielder was told in September by then-manager Jose Mourinho that he would never captain the club again, days after an apparent disagreement over tactics.

Mourinho denied at the time that there had been any fallout between the pair, having taken the decision to strip Pogba of his role as United vice-captain.

The decision was made public days after Pogba appeared to question Mourinho's approach by telling reporters that United should "attack, attack, attack".

Pogba, who performed erratically for his club over the first half of the season, has scored five goals in six appearances since Solskjaer arrived as interim boss on December 19.

The Frenchman made his debut for United's reserve team when Solskjaer was their manager during the 25-year-old's first spell at the club.

The Norwegian said that he has long believed Pogba has what it takes to lead a team, although made clear that he is happy with United's current set-up, with Ashley Young the regular captain on the pitch while Antonio Valencia, who has made just eight appearances this season, is the club captain. 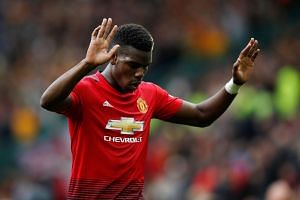 Football: Pogba deletes cryptic post of him smiling after Mourinho is axed

"I know the boy from before, and he's a leader," Solskjaer said ahead of his team's FA Cup fourth-round match against Arsenal on Friday (Jan 25).

"He's a character who influences people. He cares and wants to be successful.

"He knows he can't do it by himself. It's a team game and he's a character who brings so many good things with him when he's enjoying himself, I have to say.

"You see the personality. He loves playing football. He's a larger-than-life character. That's just the way he is.

"When the performances come as well, that marries together as a good leader and you see what it meant to him winning the World Cup. So for me, yes, he's captain material."

Pogba has faced criticism in the past for his enthusiastic use of social media, not least when a post appeared on his Instagram account after Mourinho's December sacking with a picture of himself smiling and the words "caption this".

Former United players Gary Neville and Nicky Butt both criticised the post, which was quickly deleted.

Solskjaer, though, says he is not worried about the way that players such as Pogba and teammate Jesse Lingard use social media.

"And it's all positive, it's all good messages and I don't have any problem with that whatsoever because that's Paul, that's Jesse. We've got certain rules obviously, and it's common sense."

Solskjaer said that there were no immediate plans to give Pogba the captain's armband, adding that he felt the role could sometimes be given too much significance.

"Ashley's wearing the armband, yes because Antonio's struggled with fitness as well, in and out," said Solskjaer.

"Antonio's still the club captain, but Ash is wearing the armband when he's playing. I've never been a fan of 'You're this and you're that'."