PARIS (AFP) - Patrice Evra praised the support he has received from "real Marseille" fans on Sunday (Nov 5), just three days after launching a karate kick at one of his team's own supporters ahead of a Europa League match.

The 36-year-old was suspended by Marseille on Friday after he was red-carded for the assault which occurred in the pre-match warm-up before Thursday's game against Vitoria Guimaraes in Portugal.

Marseille fans made their feelings clear to Evra at the Velodrome on Sunday as the Mediterranean side put their European troubles behind them by thrashing Caen 5-0 in Ligue 1.

"Great result tonight well done guys I'm really proud of you. Thanks to all real Olympique Marseille fans... I'm receiving so much support from them," Evra wrote on his Instagram account.

But chants rang out insulting the former Manchester United and Juventus leftback, while a banner at one end of the ground carried the slogan "This Game is Over" in English, parodying Evra's favourite slogan of "I love this game". 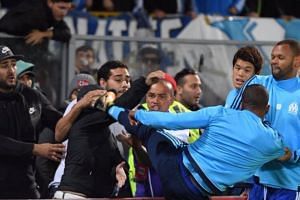 Football: Marseille's Patrice Evra red-carded before game for karate kick on own fan

Another banner read: "We don't want you in our colours anymore. Evra get lost."

Marseille have opened an inquiry after the France international was sent off following the heated altercation with a group of the French club's fans on the touchline before kick-off in Portugal.

Evra was handed an initial one-match ban by Uefa for "violent conduct", with European football's governing body indicating that he faced further sanctions at a disciplinary hearing next week.