LONDON (AFP) - Alexis Sanchez still has a future at Manchester United, according to Ole Gunnar Solskjaer, despite speculation that the Premier League giants are trying to offload the unproductive Chilean.

Reports claim United's executive vice-chairman Ed Woodward has repeatedly attempted to find a buyer for Sanchez, who arrived at Old Trafford 18 months ago with high expectations.

However, Sanchez has scored just five goals in 45 appearances for the club after netting a 4.5-year deal reportedly worth nearly £500,000 a week (S$843,000) including bonuses.

Those huge wages are the stumbling block to United finding an interested buyer, even with the transfer window for European clubs open until Sept 2.

And with Romelu Lukaku having left Manchester this month to join Inter Milan, manager Solskjaer claims Sanchez will remain at Old Trafford to offer competition to Marcus Rashford and Anthony Martial in attack.

"Alexis is such a professional and he comes in working every single day really hard and he wants to be a part of this," said the Norwegian.

"These stories that he's been put in the reserves? Of course he hasn't, he's part of our squad and he is a really good player.

"We don't have the biggest forward line in numbers so Alexis might end up playing a lot more games than you expect because we expect him to come good at this club, he's quality." 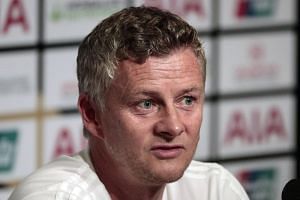 Football: One year on, Sanchez returns as a faded star

Football: Five key Premier League matches to watch in the coming weeks as season kicks off

Sanchez was injured on international duty for Chile at the Copa America in June, delaying his match fitness for the current season.

But Solskjaer is planning to find extra training minutes for the forward who has not completed a full 90 minutes since the opening day of last season more than a year ago.

"He has had three weeks now, so he's a few weeks behind the rest but close to being part of it," he said.

"We've had a behind closed doors game, he's training, a little bit of extras.

"He'll be gradually integrated into more playing time, but we'll have more behind closed doors games and with only one (competitive) game a week it's hard to keep players ticking. We are arranging a few of them."

Fitness is very much a key issue at United this season and was evident in last week's 4-0 win over Chelsea, with Solskjaer having apparently succeeded in improving the base fitness of the squad that entered last season under Jose Mourinho.

"There is a big shift and difference between the teams," said Solskjaer.

"Chelsea outran us quite a lot in April, three games ago, now we've outrun them, so that's a good shift for us.

"But it's not just about fitness, fitness is important but a young team you expect loads of energy but we also have quality."

Solskjaer also expects Brazilian midfielder Fred, signed for £52 million last summer, to have a greater impact with United this season despite an underwhelming first year in English football, particularly with the United defence reinforced by the presence of £80 million centre-back Harry Maguire.

"Your team will always play better if you are settled and have a good foundation and not conceding goals," said Solskjaer.

"The good teams I played in, we had a strong base, a keeper, settled backline and we hope to provide that for our attackers and midfielders and we believe Fred is going to have a big season as well."