Valencia (Reuters) - Valencia are expected to officially announce the resignation of coach Nuno Espirito Santo on Monday following their 1-0 La Liga defeat at Sevilla, which they finished with nine men on Sunday.

"Before the game I spoke with the president and (club owner Peter) Lim as well as again afterwards," the Portuguese told a news conference after Sunday's lacklustre performance.

"We know the situation is not good and I want the best for the club. I would like to thank the players and Lim, who is a friend of mine and will continue to be. I want people to continue to support the team," added the Portuguese.

"Tomorrow there will be a meeting at the club and after that there will be more details." Nuno was chosen to lead Singaporean billionaire Lim's project in 2014 to make Valencia one of the top sides in Europe but despite plenty of investment they are struggling to live up to expectations. 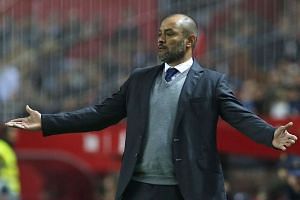 Valencia are ninth with 19 points from 13 games after Sunday's loss in which Joao Cancelo and Javi Fuego were sent off for second bookings in the 35th and 78th minutes respectively. With Nuno leaving the Mestalla, his assistant, Phil Neville, is a prime candidate to take over the reins.

In the Champions League, they face a difficult task to reach the last 16 as they languish in third place in Group H with six points from five games and one round to go. Zenit St Petersburg lead the way with a maximum 15 points and Gent have seven.

They face bottom side Olympique Lyonnais in their last group game on Dec 9 when Gent host Zenit.

Spanish newspapers Marca and As reported that Nuno had decided to resign and his body language during Sunday's news conference also suggested his mind was made up.

Alvaro Negredo, Rodrigo Moreno and Aymen Abdennour are among the big money signings that have come in and while Valencia qualified for the Champions League last season they have not been able to build on that achievement.

Valencia have a reputation for having demanding fans and there was some discontent at the way they ground out results in qualifying for Europe's top competition, while this season there have been regular chants of 'Nuno out' at the Mestalla.