Some will say their task is Mission Impossible. And yesterday, looking impeccable in their tailored two-piece suits and matching blue shirts, Singapore's national footballers certainly looked like joining silver-screen secret agent Ethan Hunt on one of his punishing operations.

Results on the pitch are hardly convincing. While the Lions ended a six-match winless run on Sunday, it came via an unconvincing 1-0 win over Cambodia.

That the Cambodians, traditionally the region's whipping boys, are ranked 167th in the world, four above Singapore (171st) is a sign of how low the Lions have sunk. 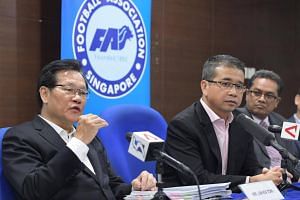 MCCY sets up provisional FAS council prior to polls

Yet, in spite of the magnitude of their task, the players appeared undaunted as they mingled at Changi Airport yesterday evening, hours before their flight to Manila.

Sundram, normally coy when talking about his team's chances in the Suzuki Cup, was unusually chatty.

READY TO BLEED FOR THE CAUSE

We're mentally prepared. We will throw ourselves into tackles and bleed if we have to.

BAIHAKKI KHAIZAN, Lions defender, on his state of mind going into the AFF Suzuki Cup.

Pointing to his flat stomach, the 51-year-old joked: "Actually I'm still in good shape. I can still play."

When someone suggested he could play Masters football, Sundram, a former national striker, deadpanned: "What do you mean Masters? I meant the Suzuki Cup. The team needs me."

"We're mentally prepared. We will throw ourselves into tackles and bleed if we have to."

The 32-year-old defender, who is out of contract having left Johor Darul Takzim II, has also called upon his younger team-mates to enter the tournament with a winning mentality.

He said: "They must (want to win), otherwise what's the point of taking football as a career? This is the level you want to showcase your ability. They must give everything. There are no excuses."

Fahrudin, who won the AFF Cup in 2007 and 2012, said there are similarities in this campaign with the triumphant one in 2012, when Singapore were also written off at the start - only to lift the trophy for a record fourth time.

Defensive stalwart Fahrudin, 35, said: "There are definitely similarities with 2012. I keep saying that.

"We know we can do better, but the win against Cambodia will give the team confidence. We have some senior players here, which will help. People say we are underdogs but let's see. It's not mission impossible."

Bennett, another three-time AFF Championship winner, was also in defiant mood. Having forced his way back into the Lions set-up after being overlooked by Sundram's predecessor Bernd Stange, the veteran defender is enjoying a second wind to his international career.

The 38-year-old added: "This is a group where everyone has a chance to advance. You can't say for sure. I can't see Thailand winning all three games.

"I'm back from the dead, it's another chance for me and I'm really happy to be back."

Maybe the mood in the Lions camp will become more tense as they approach Saturday's clash with the Philippines. Or maybe the incessant optimism is a way to cope with the expectations that come with being four-time winners of the championship.