LONDON (REUTERS) - Crystal Palace are not going to suddenly unearth world class players like Lionel Messi and Cristiano Ronaldo to fight their way out of the worst start to a season by a club in Premier League history, new boss Roy Hodgson said on Saturday (Sept 16).

The former England manager was speaking after presiding over a disappointing 1-0 defeat by Southampton at Selhurst Park, the Eagles' third league loss at home and fifth in total this season without a goal to their name, having taken charge this week.

The much-travelled Hodgson, returning to the south London club whose junior teams he played for, promised hard work when he was appointed to replace sacked Dutchman Frank de Boer. 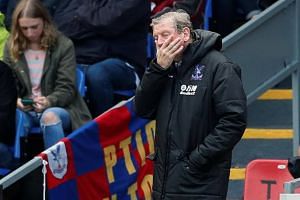 "But I'm not suggesting hard work in training will produce Messis and Ronaldos in the next three months," Hodgson told reporters after a defeat that left Palace bottom of the table.

The 70-year-old said he would continue to assess his squad to find the best players for the task ahead, which includes visiting title contenders Manchester City and Manchester United before hosting Chelsea in Palace's next three league games.

"I can't change the fixture list, all I can do is encourage the players to be as mentally strong as possible," Hodgson said.

"It's a tough programme ahead because of the quality of the opposition.

"There's no way to talk oneself out of that, no point in bold statements, we have to get down to working with the players, deciding who's best to get us out of trouble."

Palace have now broken Newcastle United's Premier League record of 438 minutes without a goal at the start of the 2005/06 season makes lifting the players' confidence even harder.

"On the psychological aspect, we have to make sure people don't dig themselves into a grave," Hodgson said.

"There is no lack of attitude from players wanting to do better but we have a psychological fight on our hands, we have to make judgements on the games and the players know that."

He said the anxiety of his players was palpable during the game but he saw an improvement in the second half after they had resorted to booting the ball up to striker Christian Benteke in the first.

"The anxiety, especially in the first half, was there for all to see, in the second there were better signs, we were prepared to put our foot on the ball and pass it."

He called the performance disappointing but said he was up for the fight.