RIO DE JANEIRO (AFP) - Neymar's agent and father poured cold water over speculation the world's most expensive footballer was mulling a transfer and instead suggested a new deal with Paris Saint-Germain was more likely.

In an interview with Brazilian website UOL Esporte the 27-year-old's dad laughed off the idea of a switch to Real Madrid or elsewhere and said his son was more likely to extend his stay in the French capital where he is already under contract until 2022.

When asked directly about rumours linking Neymar with a move back to LaLiga either with Real Madrid or Barcelona the agent laughed off the idea.

"It is highly unlikely he will move anywhere," Neymar senior said.

"Neymar has switched clubs only twice in his entire career but for 10 years we have been living with speculation of an imminent switch.

"He's in his second year at PSG already. So there's another three years to come with his first contract, and we're already moving towards a renewal with Paris Saint-Germain," he added.

The striker made his name at Santos before signing for Barcelona in 2013, before the Parisians paid out his release clause of 222 million euros (S$343 million) in 2017. 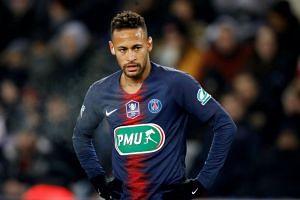 Currently recovering from a foot injury, he told O Globo in Brazil two weeks ago a move to Madrid was not impossible.

"Anyone who had an offer from someone like Real Madrid would consider it. Right now I'm happy in Paris but in future anything can happen," said the player.

"But don't say I'm going to Madrid," he warned.

"I've already achieved my dream, everyone knows that was Barcelona."