KAZAN, RUSSIA (REUTERS) - It has been a busy World Cup for Kazan's mural artists and in the early hours of Thursday morning (July 5), they were back at work again painting the face of Neymar on a wall behind the Brazil team hotel.

The Brazil forward, in Kazan for Friday's quarter-final against Belgium, is the third footballer to receive the honour with Portugal's Cristiano Ronaldo and Argentina's Lionel Messi having already been immortalised on the city walls.

While the images of Ronaldo and Messi were cheek-by-jowl near the Ramada Hotel along with a cheeky message challenging the Argentinian to match his rival's goal tally in Brazil, Neymar has his own spot near the other official team hotel, the Mirage.

The three-storey portrait of Ronaldo was painted to welcome the five-time World Player of the Year when Portugal played in the capital of Tatarstan in the 2017 Confederations Cup.

To the embarrassment of city officials, it turned out that Argentina would be staying at the same hotel ahead of Saturday's World Cup last-16 clash against France, with Messi potentially being able to see the Ronaldo mural from his room.

To avoid to appear to be taking sides in the eternal debate over which of the Spain-based forwards is the world's best player, the city commissioned the smaller side profile of Messi, also a five-time World Player of the Year.

With Ronaldo and Messi having already departed the tournament after losses in the round of 16, the path is clear for Neymar to challenge the stranglehold the pair have had on such discussions over the last decade. 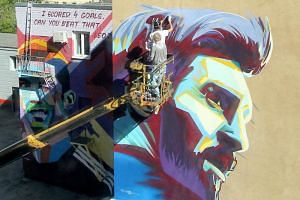 Football: Lionel Messi gets his own face-saving Kazan mural to match Cristiano Ronaldo's ahead of France game

While the Kazan murals have been popular with picture-snapping fans, one in Moscow proved more controversial when it emerged that the man tasked with decorating the city for the World Cup had commissioned a 12-storey portrait of his wife.