SOUTHAMPTON, United Kingdom (AFP) - Manchester United manager Jose Mourinho said he was relieved to see his side win 1-0 at Southampton on Saturday (Sept 23) and admitted several of his players were "not sharp".

United prevailed courtesy of a 20th-minute effort by Romelu Lukaku at St Mary's.

Mourinho's side remain level on points with Manchester City, but they now trail their local rivals on goal difference after Pep Guardiola's side trounced Crystal Palace 5-0. 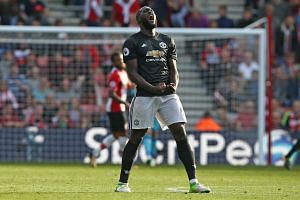 "It is not always possible to operate at high quality, but we fought hard," Mourinho told Sky Sports.

"We did what many teams in the Premier League do for 90 minutes, which was play with five defenders at the back.

"Credit to Southampton, they tried to play. (Mauricio) Pellegrino changed the team and sent on another striker to play more direct. It was a hard game, but I am really happy."

With United having toiled in attack, Mourinho said it was vital that Lukaku had taken his chance to score his sixth goal of the Premier League campaign.

"Romelu Lukaku's work is so important for us. He scored his goal and worked hard like everybody else," said Mourinho, whose side are away to CSKA Moscow in the Champions League on Wednesday.

"Nobody feels the pressure to play always attacking football because so many teams play always defensively.

"I felt some of the boys were not sharp. I didn't feel like we could score three or four goals like we sometimes do, so the option was to make sure we got the points."