LONDON (AFP) - Alvaro Morata bagged a classy hat-trick as Chelsea made short work of beating Stoke 4-0 to keep up the pressure on the Premier League leaders on Saturday (Sept 23).

Pedro also scored for Antonio Conte's side, who remained just three points off the top of the table with their title defence gathering steam.

They brushed aside an under-strength Potters side, who paid for some costly defensive errors as Morata scored early and then twice late on to take his season's tally to seven goals in six games for club and country. 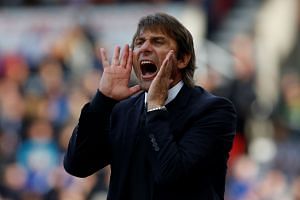 Having scored his first three goals for his new club with his head, the £60 million (S$100 million) signing from Real Madrid netted all three goals with his feet in the Potteries and he might have added to his total from two late chances.

It was a chastening afternoon for Stoke, who went into the game with just one senior centre-back available in Bruno Martins Indi.

Chelsea led after just 81 seconds as Stoke's makeshift back three were undone by a straightforward long pass.

It was played from the Chelsea defence by Cesar Azpilicueta and collected by Morata after a simple run between Glen Johnson and Bruno Martins Indi. He composed himself before beating Jack Butland low to his left.

The champions doubled their lead on the half-hour thanks in no small part to an error by Darren Fletcher.

The former Manchester United man tried to chest down a high header from Erik Pieters but only succeeded in guiding it into the path of Pedro, who skipped away from Martins Indi and rifled a superb, right-footed shot past Butland for his first league goal of the season.

Stoke went close two minutes before the break when Joe Allen found space wide on the right and crossed for Mame Diouf, who sent an overhead kick just wide at the far post.

The second half began with tempers frayed. Xherdan Shaqiri was booked for a foul and Chelsea's Marcos Alonso cautioned for tripping Allen moments after being caught by a stray arm from Diouf.

Then Alonso was late into a challenge on Diouf, leaving home fans screaming for a second yellow card and the inevitable red.

But the Spanish wing-back escaped with a final warning from referee Mike Dean. Conte responded by replacing Alonso with Gary Cahill on 58 minutes to spare him further punishment.

Stoke threatened briefly through Shaqiri but he fired straight at Thibaut Courtois after cutting in from the right. And they went closer when Johnson's lofted pass was headed down by substitute Peter Crouch to Diouf, who lifted a shot over the bar.

Play was then halted when Courtois landed awkwardly on his neck following a collision with Crouch but the goalkeeper was able to continue.

Fletcher's miserable afternoon continued when he missed a superb chance to halve Chelsea's lead. He arrived to meet a Shaqiri free-kick but failed to make clean contact with either his head or foot and bundled the ball wide.

Chelsea wrapped up victory with 12 minutes remaining thanks to more dreadful Stoke defending and another fine Morata finish.

Bakayoko charged down a Johnson pass, the rebound broke for Morata and he raced away from makeshift centre-back Fletcher before finishing from a tight angle.

And 10 minutes later Morata completed his treble when he tapped home from close range after Azpilicueta had chested down a pass from substitute Cesc Fabregas.

Morata then missed two chances to add to Stoke's misery, firing wide from eight yards then failing to force a Willian cross over the line.