LONDON (AFP) – Manchester City were left with a healthy eight-point lead at the top of the Premier League after second-placed Manchester United suffered a 1-0 loss away to champions Chelsea hours after the leaders saw off Arsenal 3-1 on Sunday (Nov 5).

United manager Jose Mourinho, a former title-winning boss with  Chelsea, saw his latest visit to Stamford Bridge end in defeat courtesy of Alvaro Morata’s 55th-minute header that ended a run of six games without a goal for the Spain striker.  Victory left Chelsea fourth, nine points off the summit.

Earlier, City were impressive against the Gunners, with Kevin De Bruyne firing Pep Guardiola’s men into an early lead at the Etihad before Sergio Aguero made it 2-0 from the penalty spot early in the second half.

Alexandre Lacazette pulled a goal back for the Gunners but Gabriel Jesus put City 3-1 up in the 74th minute despite a suspicion of offside, with Arsene Wenger’s Arsenal now 12 points behind City.

“The physical level is very good but the decisions,” veteran manager Wenger told Sky Sports.  “The third goal, at 2-1 we are in the game and he (referee Michael Oliver) gives a clear offside goal. And, of course, that kills the game for us.

“They are a top team but that (bad decisions) makes it even more difficult for you.”

However, City counterpart Guardiola had no truck with suggestions his side had been fortunate to win. 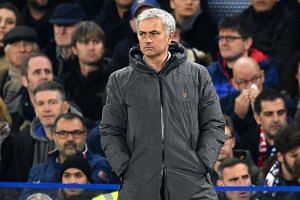 “We won in the best way and we deserved by far the victory,” said Guardiola after City backed up their midweek Champions League win away to Napoli with another commanding victory.

“We fought in the bad moments, when we were tired, mentally we were stable. I was pleased with the performance. The third goal helped us to win the game.”

Meanwhile, an injury-hit Tottenham Hotspur, fresh from a superb 3-1 Champions League win over holders Real Madrid, remained level on points with second-placed United, thanks to a 1-0 win over bottom-of-the-table Crystal Palace.

Sunday’s match at Wembley was deadlocked until the 64th minute when South Korea’s Son-Heung Min let fly from 20 yards out.

Spurs were also indebted to their third-choice goalkeeper, Paulo Gazzaniga, who marked his debut for the north London club with several fine saves after injuries meant manager Mauricio Pochettino was without the services of both Hugo Lloris and Michel Vorm.

“We knew it would be a massive challenge for us to be ready again and fresh (after beating Real) but I am very pleased,” said Pochettino. "The result was fantastic even if it wasn’t our best performance.”

Sunday’s other English top-flight clash saw Everton come from two goals down to win 3-2 at home to Watford in a result which gave caretaker Toffees boss David Unsworth a first win in charge and bolstered his hopes of taking over full-time at Goodison Park.

Goals either side of half-time from Richarlison and Christian Kabasele put Watford on course for all three points before the Merseysiders pulled one back through Oumar Niasse.  Dominic Calvert-Lewin made it 2-2 when the 20-year-old rising star headed in a Leighton Baines corner.

And Baines himself completed the comeback with a penalty in the last-minute of normal time after Hornets defender Jose Holebas slipped in his own box and inadvertently brought down Aaron Lennon.

Adding to the drama in Liverpool was the 12-minute stoppage time as a result of Watford goalkeeper Heurelho Gomes receiving prolonged treatment for a nasty head wound, with blood pouring out, before leaving the field in the second half after an accidental clash with teammate Kabasele.

Former Everton player Tom Cleverley could have rescued a point for Watford but he missed a penalty in the ninth minute of stoppage time.