MONACO (REUTERS) - AS Monaco's Champions League campaign suffered a huge blow as last season's semi-finalists fell victim to a Vincent Aboubakar double in a 3-0 home defeat by Porto on Tuesday.

Cameroon striker Aboubakar scored in each half and Miguel Layun rounded off the win in the closing stages to put Porto second in Group G with three points from two games, three behind leaders Besiktas who won 2-0 at home to RB Leipzig.

Monaco, who lost 3-0 to Porto in the 2004 Champions League final, are third with Leipzig bottom also on one point.

It was the principality side's biggest Champions League home defeat.

The hosts lost many of their top players in the close season, including exciting teenage striker Kylian Mbappe to Paris Saint-Germain, but they managed to create some early chances.

However, Porto stayed calm as Monaco piled on the pressure and were more clinical in a lively encounter at Stade Louis II. 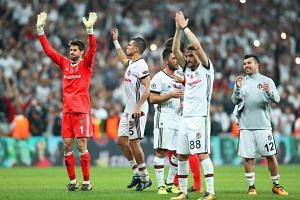 Monaco had a clear chance after four minutes when Radamel Falcao was perfectly set up in the box by Rachid Ghezzal, only for the Colombian to shoot straight at the goalkeeper.

The home side dominated, with Ghezzal proving a constant threat on the right flank, but they lacked accuracy in the opposition half.

Despite a few early bursts, Porto were on the back foot, but they went ahead in the 31st minute.

Danilo Pereira's shot was parried by keeper Diego Benaglio into the path of Aboubakar, whose first shot bounced off the post before his second attempt hit the roof of the net.

Porto were even more composed after the break while Monaco looked short of ideas and the visitors were rewarded in the 69th minute when Aboubakar tapped in Moussa Marega's cross from the right.

Porto rubbed salt in the home side's wounds in the 89th minute, with second-half substitute Layun eventually firing the ball home after a goalmouth scramble.