BARCELONA (REUTERS) - Barcelona beat nearest challengers Atletico Madrid 1-0 thanks to an outstanding free kick from Lionel Messi on Sunday (March 4) to move eight points clear at the top of La Liga and closer to a 25th Spanish title.

Barca’s all-time top scorer Messi wrapped his left foot around the ball to send it flying over the wall and inside the top corner in the 26th minute to register his 600th career goal.

Atletico, who clinched the 2014 title at the Nou Camp but have not won there since 2016, could have cut the gap with Barca to two points with a victory but coach Diego Simeone opted for a typically conservative approach.

Thomas Partey’s wayward strike from distance was Atletico’s only threat and although Simeone made two attacking substitutions his side could not force Barca goalkeeper Marc-Andre ter Stegen into making a save.

Kevin Gameiro had a goal correctly ruled out for offside late on for Atletico shortly after Luis Suarez was also denied by the assistant referee’s flag, and the Uruguayan put a chipped attempt just wide of the far post in stoppage time.  Barca lead the standings on 69 points after 27 games, Atletico have 61 and champions Real Madrid 54.

“It was a very tight game. Messi is a unique player and if he had been wearing our shirt instead of Barca’s perhaps we would have won,” Simeone told reporters.

The Argentine coach admitted it was difficult to see Barca losing their grip on their considerable lead at the top.  “The numbers don’t lie and you expect Barca won’t lose four or five games but this is football and it’s marvellous so you never know,” he said. 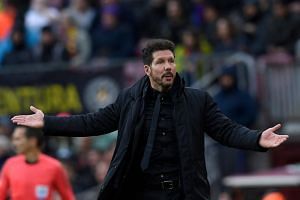 Football: Atletico would have won but for Messi - Simeone

Atletico had hammered Sevilla 5-2 and Leganes 4-0 in their last two games and travelled to the Nou Camp on a run of eight consecutive wins in all competitions and with one more day’s rest than Barca, who were held to a 1-1 draw by relegation-threatened Las Palmas on Thursday.

Both coaches could call on full-strength teams and Barca manager Ernesto Valverde started record signing Philippe Coutinho but lost captain Andres Iniesta to injury in the first half and was forced to call on the often-criticised Andre Gomes.

What should have been a showdown for the title failed to live up to expectations as Atletico focused on cancelling out Barca and limiting Messi to as little space as possible.

They had not counted on the Argentine’s remarkable ability to score from free kicks, however, and Messi decided the game, and quite possibly the title race, with a third exquisite set-piece goal in as many games.

Barca coach Valverde said his side could not rest easy until the final whistle despite Atletico’s paucity of chances.

“They didn’t have clear chances but you’re never relaxed because they have great forwards. We had to suffer, because if you want to beat Atletico Madrid you always have to suffer,” he said.

“Above all, I’m proud of how we competed. In games like this throughout the season we’ve lived up to expectations and today we did it again.”