LONDON (REUTERS) - Tottenham Hotspur manager Mauricio Pochettino is confident the club will be able to move into their new stadium before the New Year after a series of expensive delays.

The Argentinian said he had been reassured by chairman Daniel Levy that Spurs would be able to occupy their new 62,000-seater home, built over their old stadium White Hart Lane, by Christmas.

Tottenham have been forced to continue playing home games at Wembley this season after several delays, including safety concerns, pushed back their move to their new home from the intended date of Sept 15.

"(We will move) this year. I am confident," Pochettino told reporters on Tuesday (Sept 25), a day before his team's League Cup tie with Watford, which will be played at Milton Keynes Dons' stadium.

"I had some private conversation with Daniel. I think they are confident. They are working hard to try to find the solution. I hope before Christmas we can play."

Spurs were forced out of Wembley for Wednesday's match because of the heavyweight boxing title fight between Anthony Joshua and Alexander Povetkin last weekend.

"Of course we feel sorry for the fans who are going to move one hour and a half maybe to Milton Keynes," Pochettino added. "But that is a circumstance we need to adapt to. 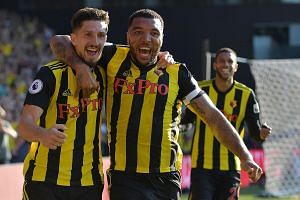 "If we want to have one of the best stadiums in the world our fans need to understand that this situation happened and we cannot change the reality."

Tottenham were beaten by Watford in the Premier League at the start of the month, a defeat that sent Spurs on a three-match losing run in all competitions, which they snapped by beating Brighton on Saturday.