LONDON (REUTERS) - Mauricio Pellegrino said he was sorry to leave Southampton in danger of relegation after becoming on Monday (March 12) the ninth Premier League manager this season to lose his job.

Southampton managed only one win in Pellegrino's last 17 Premier League matches at the helm, sliding to fourth from bottom in the table, one point above the relegation zone.

The Argentine, who replaced Claude Puel, wrote an open letter to fans which was published on the club's website on Tuesday.

"From the beginning I tried to do my best every single day, I tried to give back to the club and tried to represent the club with pride," the letter began.

Pellegrino did lead Southampton into the FA Cup quarter-finals, where they will play third-tier Wigan Athletic on Sunday, but the priority for whoever takes over for the rest of the season will be to preserve their top-flight status.

"I feel so sorry to leave the club in this situation, but when you don't get results, I understand the decision the club has to take," he said.

"I wish everyone all the best for the rest of the season, I have enjoyed an amazing experience and I know that Southampton has everything required to move forward." 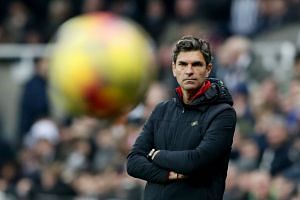 Southampton face a huge relegation clash in their next league match when they go to West Ham United, who are one place and two points better off in the table.

Mark Hughes, who had a short spell at Southampton as a player, is one of the leading favourites to replace Pellegrino.