SINGAPORE - Despite pumping in almost €1.03 billion (S$1.64 billion) since being taken over by Qatar Sports Investments in 2011, Paris Saint-Germain are still on a quest to secure a maiden Champions League title.

The continuous failure despite the recruitment of star names like Neymar, Kylian Mbappe, Edinson Cavani and Angel di Maria has seen the manager's seat refreshed several times at the seven-time French champions, whose best results in Europe's most prestigious club competition remain the quarter-finals.

But former PSG left-back Maxwell, who played for the club from 2012 to 2017 and is currently their sports coordinator, feels that the club can do better this season with the new man in the dugout.

"He (Tuchel) brings with him a new energy and new system of play which will give the players a new knowledge of football and we are confident that we can reach our goals with him," said the Brazilian on Thursday (July 26).

"When you play for a club like PSG, every competition is important. It is our obligation to fight every day to win, be it the Champions League, the French Ligue 1 or any competition we take part in."

Midfielder Marco Verratti is also hoping the club can go all the way this season after he was sent off in the second leg of the Champions League last-16 tie against Real Madrid last season. The team went on to lose 2-1 and the tie 5-2 on aggregate. 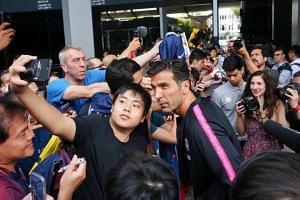 On the sidelines of a media trialling session of the new Nike PhantomVSN football boot, Verratti, who grimaced when the topic of the Champions League was raised, told The Straits Times: "We will give our maximum this year to go further than we did (previously).

"I am confident because we have a very good team... (But) you can't forget that there are other teams who are very good as well. It is a competition where you need to take each game at a time."

So far this season, PSG have secured the services of legendary Italian goalkeeper Gianluigi Buffon while they are reportedly closing in on the signature of Germany and Bayern Munich defender Jerome Boateng.

But Maxwell cautioned against hyping up their chances in the Champions League, saying: "All the big clubs, they spend money and they have big squads but only one team wins it every year. We will try to be as competitive as we can."

For up-and-coming midfielder Christopher Nkunku, 20, playing with the likes of the experienced Buffon and others is something he relishes and hopes to learn from.

He said: "Players at PSG like Neymar and Cavani all have different qualities and I try to learn every day in a different way to improve my game.

"So far the feeling (in pre-season) has been good and I hope the team will be able to do well in the coming season."

Nike will launch the PhantomVSN boot, priced at $399, online at nike.com on July 30 and in stores on Aug 2.