PETALING JAYA (THE STAR/ANN/REUTERS) - Faiz Subri has made Malaysia proud.

The 29-year-old created history early on Tuesday (Jan 10) morning when he was named the winner of the Puskas Award for the best goal at the Best Fifa Football Awards 2016 in Zurich. He is the first Asian to win the award.

His physics-defying goal in the 4-1 win against Pahang in a Malaysian Super League match at the City Stadium in Georgetown on Feb 16 last year garnered 59.46 per cent of the online votes. He finished way ahead of the other two finalists - Brazilian Marlone ( 22.86 per cent) and Venezuelan woman player Daniuska Rodriguez (10.01 per cent).

The goal came from a 35m free kick in which the ball dipped and swung in a bewildering fashion to leave the goalkeeper stranded.

Faiz, who received the award from Brazilian legend Ronaldo, took a couple of minutes to compose himself before reading out his acceptance speech from his phone. 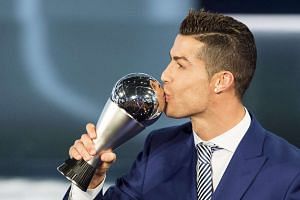 In a tweet, he added: "Honestly, it never crossed my mind that I would arrive at this level and be able to stand with world class footballers in this amazing place."

He signed off the tweet by saying: "Malaysia Boleh, Haria Penang Haria".

The Puskas Award was introduced in 2009 to recognise the best goal of the year. Faiz thus joined an elite band of players to win the award. The previous famous names to win the award were Portugal's Cristiano Ronaldo (2009), Brazilian Neymar (2011), Zlatan Ibrahimovic of Sweden (2013) and Colombian James Rodriguez (2014).

Faiz's family stayed up to watch the live telecast on television. About 200 people also gathered at the residence of Subri Kadir, Faiz's father, in Kampung Pida 6 in Ayer Hitam, Kedah, to watch on a giant screen of the historic moment.

Despite the wee hours, there was an air of carnival at the village. The villagers had started arriving from as early as 9pm on Monday and were served  nasi lemak, kuih, syrup drinks and coffee as they waited for the start of the ceremony at 1.30am.

The crowd cheered each time Faiz's goal was shown during the ceremony.

And when Faiz was named the winner there was a loud roar.

Subri was elated with his son's achievement.

"All his hard work has paid off. I am proud of my son. I am thankful to God for making our dreams a reality," said Subri. "Faiz should not be contented with this win. He should aim for more success. I want him to do it again. Score another goal like that to prove to everyone how good he really is."

Faiz's mother Saadiah Ishak was in tears as she watched her son receive the award.

"Syukur Alhamdulilah, I am very proud of my son. He always wanted to achieve big things in football, and today, he can stand tall."