The 48-year-old German, who was named as Brendan Rodgers's successor on Thursday, inherits a task similar to the one that faced him at Borussia Dortmund in 2008, that of restoring a sleeping giant to former glories and upsetting the established hierarchy.

He led Dortmund to two Bundesliga titles and a Champions League final, while the style of breathless pressing football that he inculcated looks custom-made for the blood and thunder of the Premier League.

"Fighting football, not serenity football, that is what I like," he has said.

"What we call in German 'English football' - a rainy day, heavy pitch, finishing 5-5, everybody is dirty in the face and goes home and cannot play for weeks after."

Klopp might not find exactly that on the immaculate playing surfaces of the English top flight, but his blend of charisma and candour seem certain to strike a chord with Liverpool fans, not to mention his sense of humour.

Discussing an injury to Dortmund defender Mats Hummels, he said: "We will wait for him like a good wife waiting for her husband who is in jail."

Asked for his thoughts after Dortmund had demolished Bayern Munich 5-2 in the 2012 German Cup final, Klopp grinned: "It could have been a bit warmer." 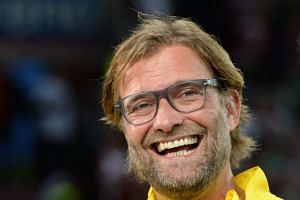 Football: Klopp to be unveiled as Liverpool manager

But while he rivals Jose Mourinho - whose path he will soon cross - in the quotability stakes, it is on the pitch and the training ground that Liverpool's owners Fenway Sports Group will expect him to deliver.

Dortmund were stagnating when Klopp arrived from Mainz in 2008, having finished seventh twice, ninth and 13th in the previous four seasons, and Liverpool have also reached something of an impasse.

After narrowly missing out on the Premier League title in 2014, they finished sixth last season and currently sit in 10th place after one win in their last six games.

Under Rodgers, Liverpool spent around £300 million (S$600 million) on new players, but with Luis Suarez, Steven Gerrard, Jamie Carragher and Raheem Sterling having all departed during his tenure, they now lack an identity.

The current squad are a disparate bunch and Rodgers' tactical tinkering proved a barrier to on-pitch continuity, but the clear-sighted Klopp will look to impose order quickly.

"The first point is to get the right players, try to recognise the potential, try to develop it and turn it into skills with everyone who is involved," he said while at Dortmund.

"That's how you can find success. You need a game philosophy which reflects your mentality, which reflects the club, which gives a direction to follow."

Klopp, unmistakeable with his stubble and glasses, built Dortmund's game around the principle of 'gegenpressing', or counter-pressing.

It soon became a buzzword in European football and fans in Germany grew accustomed to the sight of Klopp's yellow-shirted hordes asphyxiating their opponents with high pressing and quick transitions.

It was an approach that reached its apogee in a 4-1 demolition of Mourinho's Real Madrid in the 2012-13 Champions League semi-finals, when Robert Lewandowski scored all four goals.

Dortmund ran out of puff last season, finishing seventh in the league and losing to Wolfsburg in the German Cup final, but Klopp has had time to fine-tune his philosophy during a five-month sabbatical.

"He is for me one of the best in the world," says Germany great Franz Beckenbauer. "This combination - Liverpool and Jurgen Klopp - it's a very good combination."

Liverpool's 25-year wait for a league title has only served to increase the emotional attachment fans feel towards their club, but although that emotion can cloy, Klopp is likely to embrace it.

In place of the Westfalenstadion's Yellow Wall he now has the famous Kop and with You'll Never Walk Alone lustily sung before home matches at both clubs, Anfield will feel like a second home.

“We’re facing the greatest challenge there is in football: to play against an Italian team that only needs a draw.” - Prior to a Champions League last 16 second-leg match against Juventus last season

“He likes having the ball, playing football, passes. It’s like an orchestra. But it’s a silent song. I like heavy metal more. I always want it loud.” - On difference between him and Arsenal manager Arsene Wenger

“When Dortmund last won here 19 years ago, most of my players were still being breast-fed.” - Following a victory at Bayern Munich in 2011

“We will wait for him like a good wife waiting for her husband who is in jail.” - On being forced to fare without injured centre-back Mats Hummels

“Mkhitaryan fits us like an arse on a bucket. What he offers is exactly what we need.” - On signing Armenian midfielder Henrikh Mkhitaryan

“Gotze has gone because he is (Pep) Guardiola’s personal chosen signing and he wants to play with Guardiola, in his style. I can’t make myself 15 centimetres shorter or start speaking Spanish.” - On Mario Gotze’s departure to Bayern Munich in 2013

“The fans should not only recognise us by our black and yellow jerseys. Even if we play in red, everyone in the stadium should think, ‘Whoa, that can only be BVB.’” - On his desire to instil an identity at Dortmund

“They are like the Chinese in the business world. They look at what others are doing and copy it, just with more money.” - On competing with super-rich Bayern Munich

“The only thing I can say is that it was great. London is the town of the Olympic Games. The weather was good, everything is OK. Only the result is so s**t.” - After Dortmund’s 2-1 loss to Bayern Munich in the 2013 Champions League final at Wembley