ROME (AFP) - Romelu Lukaku completed his long-awaited move to Inter Milan from Manchester United on Thursday (Aug 8) after the Serie A club announced his arrival in Italy on a five-year deal.

“The Belgian footballer, arriving from Manchester United on a permanent basis, has signed a contract with the Nerazzurri until June 30, 2024,” Inter said in a statement.

The club did not reveal Lukaku’s wages nor the fee paid to Premier League side United, reported in Britain to be in the region of €80 million (S$120 million).

Milan-based Gazzetta Dello Sport reports that the player will earn €8.5 million a season at Inter, and claims that the club will pay United €65 million up front with a further 10 million in add-ons.

Inter announced the deal with a video of the 26-year-old in an Inter shirt saying: “Inter: it’s not for everyone, that’s why I’m here.”

Lukaku, who had long been tipped for the move to Inter, landed in Milan early on Thursday morning for his medical, with fans who waited at the airport for his arrival chanting “ Lukaku is ours”.

Belgium’s all-time top-scorer with 48 goals has not played a single minute of United’s pre-season campaign ahead of the move, and has been pictured training instead with Anderlecht, the club with which he started his senior career. 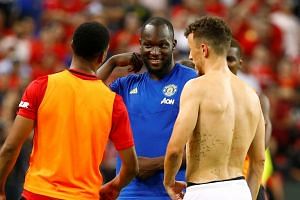 He was frozen out by United manager Ole Gunnar Solskjaer and will be welcomed at the San Siro by new Inter coach Antonio Conte, who tried to take him back to Chelsea in 2017.

During his time in England, where he played for the Blues, Everton and United, Lukaku scored 113 Premier League goals, and bagged 42 in all competitions while at Old Trafford.

Inter are also reportedly close to bringing Edin Dzeko to Milan, with the Bosnian pushing for the move away from the Italian capital and Roma trying to retain him after failing to find an adequate replacement.

Lukaku’s signing and the expected arrival of Dzeko further rules out any chance of Mauro Icardi forcing his way back into the side after being stripped of the captaincy and dropped following a bitter and public contract row.

Inter have also sent Lukaku’s former Belgium teammate Radja Nainggolan out on loan to former club Cagliari just a year after arriving from Roma for a reported 38 million euros.

Conte’s side are expected to push Juventus, who have won the last eight Serie A titles, in the coming season after qualifying for the Champions League in fourth place two years in a row.